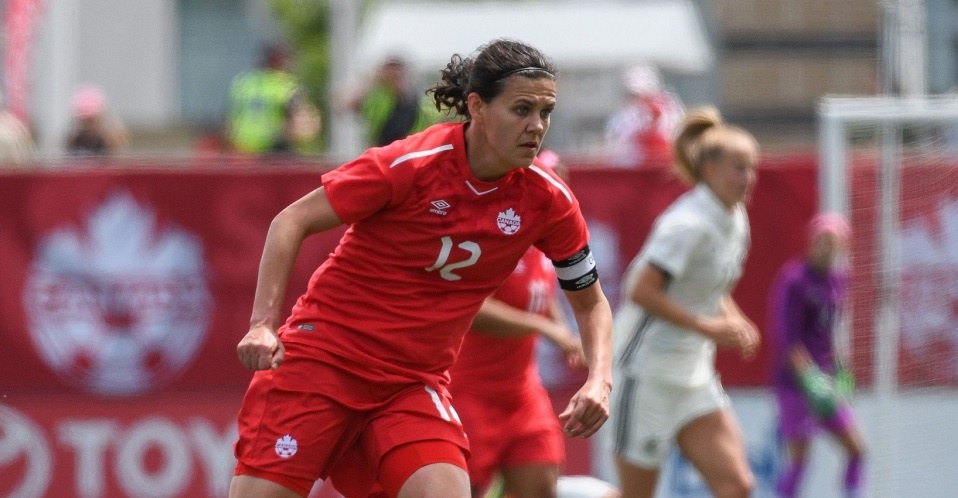 Canada Soccer has released its Women’s National Team roster for the upcoming 2018 Concacaf Women’s Championship that serves as the qualification tournament for the FIFA Women’s World Cup France 2019™.  Canada will play its group stage matches at H-E-B Park in Edinburg, Texas, beginning with its opening match against Jamaica on Friday, 5 October at 19:30 ET (18:30 Local), followed by Canada v Cuba on Monday, 8 October at 19:30 ET (18:30 Local) and Canada v Costa Rica on Thursday, 11 October at 21:00 ET (20:00 Local).  Following the group stage, all matches will be played at Toyota Stadium in Frisco, Texas.

Canada Soccer’s roster is a strong blend of youth and experience, with Captain Christine Sinclair leading a group that has a total of 1,331 Women’s National Team appearances for an average of just over 66 appearances per player, including four players with over 100 appearances and five teenagers.  In bringing in the core of Canada’s 2016 Rio Olympic Bronze Medal winning team, along with Canada’s top young players, Canada Soccer Head Coach Kenneth Heiner-Moller is continuing to build the depth of the squad with an eye on having the best possible line up should Canada qualify for France 2019.

“We are very happy with the players we have selected for the tournament and we think this is the group that will give us the best shot at qualifying for next year’s FIFA Women’s World Cup in France, and that is our primary objective for this tournament,” said Head Coach Kenneth Heiner-Moller.  “We’ve been really impressed with how this group has been playing together throughout 2018 and how they are continually working to improve both on and off the field.”

The top three teams in the tournament will automatically qualify for the FIFA Women’s World Cup France 2019™, with an additional opportunity for the fourth-place team to qualify through a playoff with Argentina of CONMEBOL.
“We are expecting to be tested in our group.  Our opponents are hungry and are really going out there to try and earn a spot in France for their nations, so we are going to have to go into each game in excellent form and with our eye on ensuring we qualify,” said Heiner-Moller.  “Tournaments are grueling, with fast turn arounds between matches, and we will be enduring hot temperatures as well, so our attention now is on giving these 20 players the best opportunities to be successful.”
The winners of the two semi-final matches on Sunday, 14 October will automatically qualify for the FIFA Women’s World Cup, as well as the winners of the 3rd place match scheduled for Wednesday, 17 October.  The final taking place on Wednesday, 17 October will determine the continental champions.

Canada Soccer’s Women’s National Team
Canada are two-time Olympic bronze medal winners (2012 and 2016) and two-time CONCACAF champions (1998 and 2010). In all, Canada have participated in six consecutive editions of the FIFA Women’s World Cup (1995 to 2015) and three consecutive editions of the Women’s Olympic Football Tournament (2008 to 2016). At Rio 2016, Canada Soccer’s Women’s National Team were the first Canadian Olympic team to win back-to-back medals at a summer Olympic Games in more than a century.