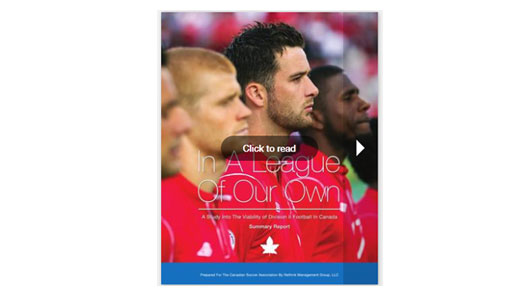 Canada Soccer has released today a 32-page report on the viability of division II soccer in Canada.

The Canadian Soccer Association has released today a 32-page report on the viability of division II soccer in Canada. The study was commissioned to Rethink Management Group in late 2011.

Directed by former national team player James Easton, the study had for its objective to determine if a national division II type league would be economically and logistically viable in our country, as well as identify the most coherent and sustainable pathway for Canada’s young talents to reach an elite level in soccer.

Conducted in two phases, the study looked at the soccer landscape in Canada, both past and present, consulting with participants at all levels of North American soccer – from federation Presidents to club youth coaches, players to influencers, writers to supporters – before composing and detailing potential model options.

It was ultimately recommended by Rethink Management Group that the Canadian Soccer Association look at a regional semi-professional development-focused league, competing at a division III level and operating in Canada’s largest soccer markets, focused on providing players aged 18-23 a structured and meaningful competition environment.

“The Canadian Soccer Association acknowledges the work of James Easton and the Rethink Management Group. We consider the model outlined in the study provides a realistic and economically responsible starting point for our organization,” said Victor Montagliani, President of the Canadian Soccer Association. “We also believe that, in time, it could become a fantastic vehicle to link and harmonize our development structure with existing soccer partners for the benefit of Canada’s up-and-coming athletes.”

According to James Easton, Rethink Management Group, “the new association of region-based, semi-professional, development-focused league concept we have recommended in this study, while not the national professional model some might have hoped for, has the potential to be an important stepping-stone in the elite player pathway along which Canadians can rise to the top tier of professional football.”

The 32-page report produced by Rethink Management Group, titled In a League of Our Own, is available to the public here..