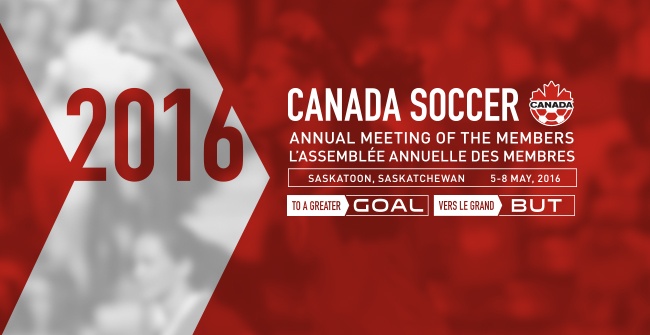 Annual Meeting of the Members 7 May

Canada Soccer will hold the 2016 Annual Meeting of the Members this 7 May in Saskatoon, Saskatchewan. The weekend serves as a review of the successful past year as well as a springboard to greater things to come in 2016 and beyond.

A full review of the past year, which featured the record-setting FIFA Women’s World Cup Canada 2015™, as well as elections; By-law updates; sharing of best practices between the presidents of the Provincial/Territory Associations; and updates on the 2014-18 Strategic Plan.

Also as part of the weekend, the annual Awards Banquet will take place on Saturday night. This year’s banquet will celebrate the President’s Award, the Aubrey Sanford Meritorious Service Award, the Award of Merit, the Ray Morgan Memorial Award, and the International Achievement Award for officials. Two-time CONCACAF champion and Olympic bronze medal winner Karina LeBlanc will serve as the evening’s emcee.

This year marks the 96th edition of the Canadian Soccer Association’s Annual Meeting of the Members. It also marks the third time the meetings have been conducted in Saskatoon, “the bridge city in the land of the living skies,” having previously come to the Saskatchewan city in 1957 and 1982.