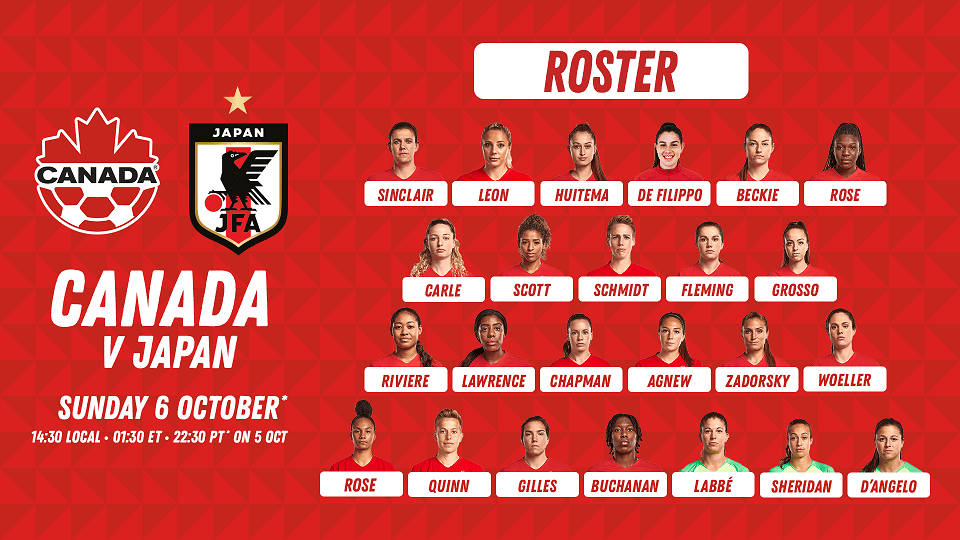 Canada Soccer have announced their October squad for the Women’s International Friendly match to be played in Shizuoka, Japan. It will mark a valuable test for […]

Canada Soccer have announced their October squad for the Women’s International Friendly match to be played in Shizuoka, Japan. It will mark a valuable test for the two nations as they both begin their campaigns towards the Tokyo 2020 Olympic Games in Japan with Canada focussed on qualification in early 2020.

The 6 October 2019 match will pit Canada against the 2020 Olympic Games hosts and former FIFA Women’s World Cup champions. While Japan have already qualified as the host nation, Canada are preparing for next year’s Concacaf Women’s Olympic Qualifying Tournament which will be played in January/February 2020 (with exact dates and location yet to be announced). Only the top-two Concacaf nations will qualify for the 2020 Olympic Games.

Canada have recalled the majority of their FIFA Women’s World Cup squad along with centre backs Vanessa Gilles and Jade Rose as well as forward Jessica De Filippo, a first-time call up to the Women’s National Team. As part of the nine-day camp overseas, Canada will face Japan in an official Women’s International Friendly match on Sunday 6 October and then again in a closed exhibition match on Monday 7 October. The Women’s International Friendly match kicks off at 14.30 local (01.30 ET on 6 October / 10.30 PT on 5 October).

“Everything that we are doing now is preparing to qualify for next year’s Olympic Games in Japan,” said Kenneth Heiner-Møller, Canada Soccer’s Women’s National Team Head Coach. “We will be taking advantage of everything during our time in Japan, so both facing an opponent who has a very good track record as former FIFA Women’s World Cup champions as well as familiarizing ourselves in the host country ahead of the 2020 Olympic Games.”

This will mark Canada Soccer’s Women’s National Team’s first visit to Japan since 2007 ahead of the FIFA Women’s World Cup in China PR. Incidentally, that 0:0 draw also marked the 100th international match for current captain Christine Sinclair, who has since added 186 more international matches to her record. Sinclair has scored five goals and two assists in nine international matches against Japan, including a 2008 hat trick.

Incredibly, Sinclair has scored 182 career goals in 286 matches, just three back of surpassing the all-time international record of 184.

CANADA PREPARE FOR OLYMPIC GAMES
This will be the 14th international meeting between the two sides since they first met on 5 May 1995 in Tokyo, Japan. After winning the FIFA Women’s World Cup Germany 2011, Japan won three straight matches against Canada before Canada won 2:0 over Japan at the 2018 Algarve Cup, the most recent meeting between the two nations. All time, Japan hold a slight edge with six wins and three draws to Canada’s four wins and three draws.

Beckie and Lawrence were the goalscorers in that last international meeting in 2018, with Lawrence recently named Canada Soccer’s Player of the Month in June during the FIFA Women’s World Cup France 2019 window. Beckie and Sinclair, meanwhile, have been Canada’s two most dominant goalscorers since the FIFA Women’s World Cup Canada 2015 with 23 goals each from open play.

In all, Canada will have 24 players in camp during the international window, including players from professional clubs in the NWSL, England, France, and Sweden. In recent months, both Sinclair (July) and Sabrina D’Angelo (August) have been named Canada Soccer Players of the Month for their performances with their professional clubs.

“It is crucial as a program that we qualify and deliver a massive performance at the Women’s Olympic Football Tournament in Japan next year,” said Heiner-Møller. “From the FIFA Women’s World Cup forward, there are elements that we need to maintain, but we also need to improve and focus our attention on those solutions to put together an even better performance in 2020.”

So far this year, Canada have posted an record of seven wins, three draws and two losses in 12 international matches. Reaching back to September 2018, Canada’s record is 12-3-3, with their only three losses against the top three nations from the FIFA Women’s World Cup France 2019 (USA, Netherlands and Sweden). Earlier this year, Canada posted a 10-match unbeaten streak, the second longest in program history.

“These young Canadian players are good enough and when the path presents an opportunity for them to grow as individuals, they should be there in our squad,” said Heiner-Møller. “We are constantly monitoring a pool of 40-50 players for this year and future years, so we also hope that these young players can take those valuable lessons from the Women’s National Team back home to our Regional EXCEL Centres across the country.”