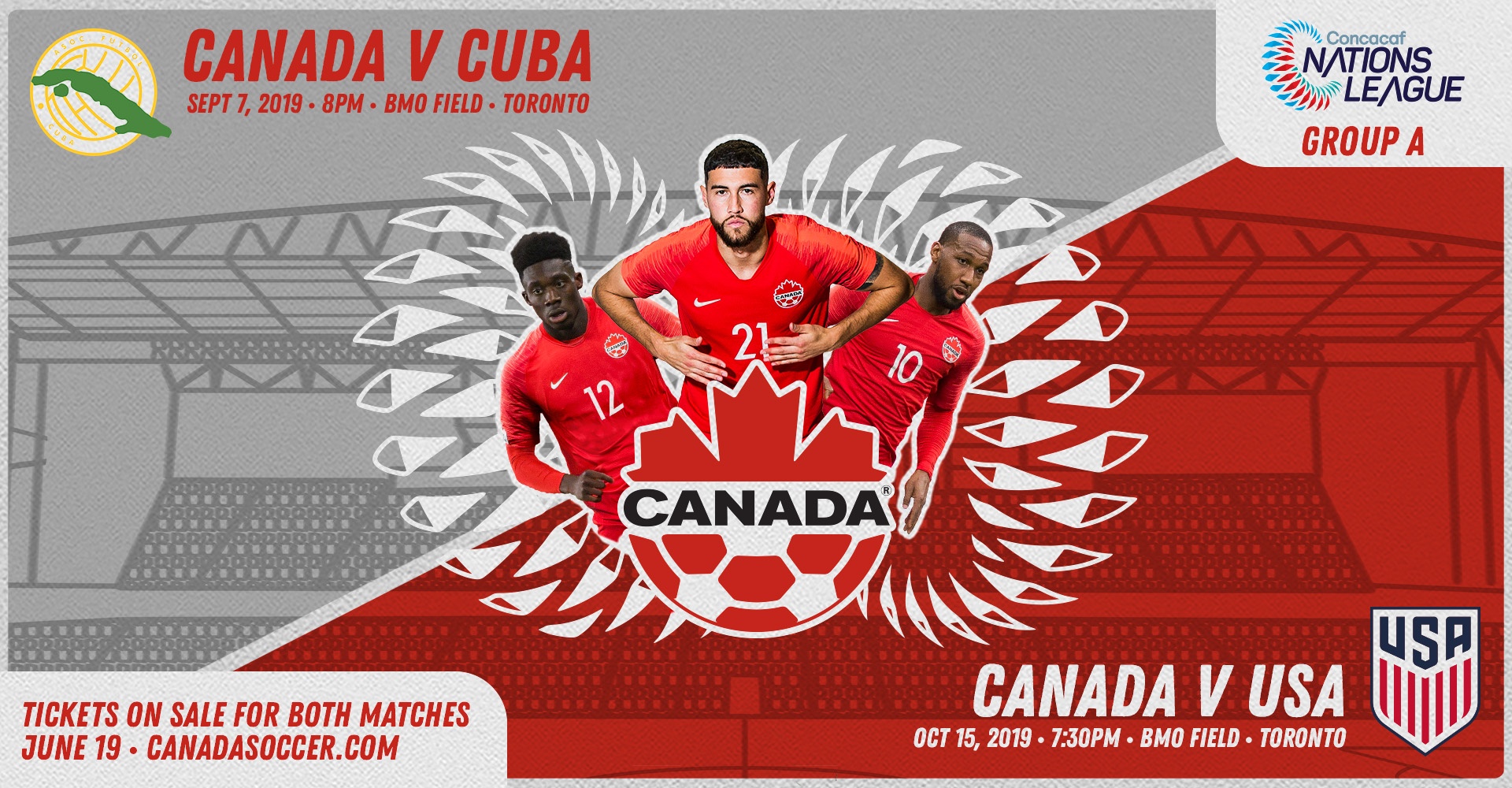 Canada Soccer have announced that a pair of home matches in 2019-20 Concacaf Nations League A will be played at BMO Field in Toronto. The announcement […]

Canada Soccer have announced that a pair of home matches in 2019-20 Concacaf Nations League A will be played at BMO Field in Toronto. The announcement coincides with the one-year anniversary of Canada, Mexico and USA winning the bid for the 2026 FIFA World Cup™.

Individual match tickets are available starting at just $20 and fans will have the opportunity to save 20% by purchasing a two-match package for both games. The launch of public ticket sales will be preceded by a 24-hour presale offer for Canada Soccer Insiders. Groups of 10+ are eligible for discounts of up to 30% and dedicated sections will be allocated for Canadian supporters as well as those from both Cuba and the United States. For complete ticket information and to submit a group ticket order visit canadasoccer.com/tickets.

“The opportunity to play at home is always an honour and a privilege for the players and the staff,” said John Herdman, Canada Soccer’s Men’s National Team Head Coach. “To have our own fans there, our boys have been dying for these moments, so we’re excited to get back and start showing Canadians our quality. These games at home are all about getting results, results which will be critical to our FIFA World Cup Qualifiers process. Our fans play a big role in pushing our team forward, so we look forward to seeing a packed house at BMO Field.”

As part of the home and away schedule for Group A of the 2019-20 Concacaf Nations League, Canada opens at home against Cuba in September before their away fixture on 10 September. Following the October home match against the United States, Canada will take on the United States on 15 November.

Canada impressed in Concacaf Nations League Qualifying after finishing second in the qualification stage with four wins, 12 points, 18 goals scored, and just one goal conceded. In those four victories, Canada scored nine goals in home victories in Toronto and Vancouver, the most ever in back-to-back home matches for the Men’s National Team.

CONCACAF GOLD CUP
The Concacaf Gold Cup is the official national team championship of the confederation. Drawing large crowds and millions of television viewers from across the region, the Concacaf Gold Cup is a celebration of soccer, sportsmanship, and culture. For the first time, the 2019 Concacaf Gold will feature 16 participating nations, three host countries, and 17 venues.

Beyond the Concacaf group phase, the top-two teams from each group will advance to the Quarter-final matches on 29-30 June. The Concacaf Semi-finals are 2-3 July and the championship Final is Sunday 7 July.

SUMMER OF SOCCER: TOGETHER WE RISE
Canada’s National Teams have embarked on an incredible month of competition during the FIFA Women’s World Cup France 2019™ and the 2019 Concacaf Gold Cup. Your National Teams are united as “Together We Rise” with the momentum for our game stronger than ever. We urge Canadians to rally behind your National Teams as our Canada Soccer Nation strives for best-ever performances.