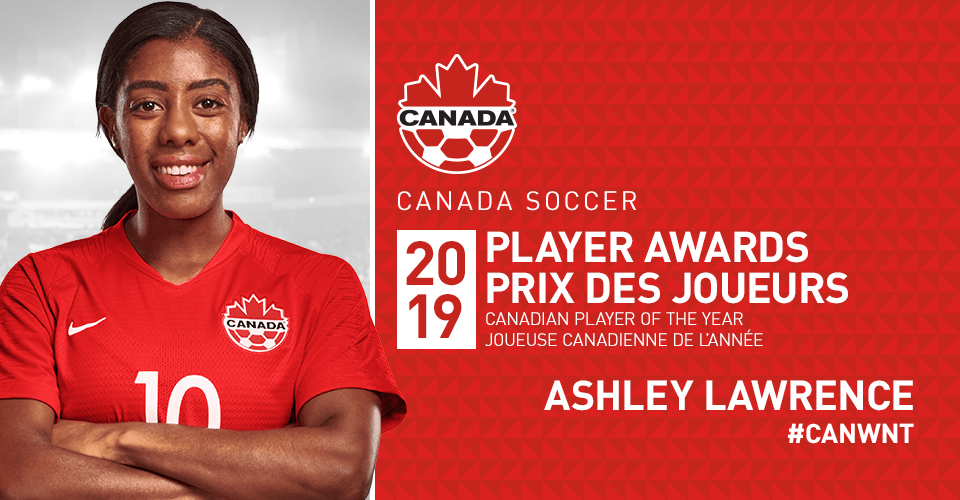 Ashley Lawrence has been voted the Canadian Player of the Year for the first time after a terrific season with Canada Soccer’s Women’s National Team and professional club Paris Saint-Germain FC in France and UEFA Women’s Champions League. She was Canada’s top player in the month of June during the FIFA Women’s World Cup France 2019 as Canada reached the knockout phase for the third time.

In 2019, Lawrence led Canada with four assists at the international “A” level and was named Canada Soccer Player of the Month in both June and November. She was one of four footballers to play in all 15 matches, featuring primarily at right back as she led Canada in minutes played for the second year in a row. She was Canada’s player of the match in the Round of 16 at the FIFA Women’s World Cup France 2019.

Lawrence of Caledon East, Ontario was honoured from a vote shared by Canadian media and Canadian coaches. Lawrence shares the 2019 Canadian Players of the Year award with co-winner Jonathan David from Canada Soccer’s Men’s National Team.

“Ashley Lawrence is a fantastic, positive individual with great character and someone who looks at ways to improve her game all the time,” said Kenneth Heiner-Møller, Canada Soccer’s Women’s National Team Head Coach. “She is a world-class player with a fast-paced drive on the ball; she has the ability to pass, cross and shoot with both feet; she is able to play at several positions on the highest level. In 2019, her leadership abilities continued to develop both on and off the pitch, providing a positive impact on both her younger teammates as well as her own game.”

At the club level, Lawrence helped Paris Saint-Germain finish second in the league standings in the 2018-19 Championnat de France, the same position they hold four months into the 2019-20 campaign. In cup competitions, she helped PSG reach the Quarter-finals of both the 2019 Coupe de France and 2018-19 UEFA Women’s Champions League. The club has also qualified for the Quarter-finals of 2019-20 UEFA Women’s Champions League to be played in March and April 2020.

Looking ahead with Canada Soccer’s Women’s National Team, Lawrence will be an important part of Canada’s search for a fourth-consecutive qualification to the Olympic Games. The eight-nation Concacaf Women’s Olympic Qualifying Tournament runs 28 January through 9 February from which two nations will qualify for Tokyo 2020. Canada will play group matches against St. Kitts and Nevis (29 January), Jamaica (1 February) and Mexico (4 February) in Edinburg, TX after which the top-two nations in the group will advance to the Concacaf Semi-finals on 6 February in Carson, CA. Winners of the Semi-finals advance to the 2020 Concacaf final and qualify for the Tokyo 2020 Olympic Games.

This past year marked Canada Soccer’s seventh consecutive participation at the FIFA Women’s World Cup and the first time Canada reached the knockout phase in back-to-back tournaments. From FIFA’s detailed review of the 24 finalists at France 2019, Canada led the way in statistical averages for possession (61%), passes (581) and opponents bypassed (419). In a nine-month run after qualifying in October 2018, Canada posted seven wins, three draws and three losses in 13 international matches, with their only losses to the world’s top-three nations USA, Netherlands and Sweden. That string also included a 10-match unbeaten streak, the second longest in program history.

Lawrence, 24 years old, has made 83 international appearances for Canada Soccer’s Women’s National Team since making her debut as a teenager on 12 January 2013. She played her youth football for Brams United SC and Erin Mills SC before attending West Virginia University and then turning pro with Paris Saint-Germain FC.  She was 14 years old when she made her debut in the Canadian youth program in 2010 and she won Canadian U-17 Player of the Year honours in 2011 and 2012.

This marks the 27th edition of the Canada Soccer Player Awards. Amongst women’s footballers, Ashley Lawrence finished first in voting ahead of runner up Janine Beckie and top-five finishers Kadeisha Buchanan, Christine Sinclair, and Stephanie Labbé.

Canada Soccer Moments, Plays and Goals of the Year

Canada Soccer’s annual Moments campaign will be announced on 20 December outlining the Top 10 Moments from 2019 across National Teams and player activity as well as the Canadian Championship.