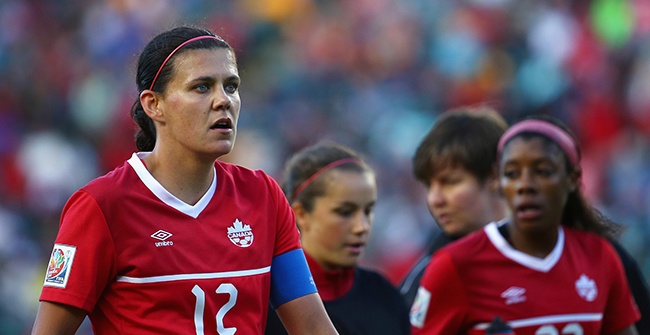 Canada sitting atop Group A after scoreless draw against New Zealand

Canada sitting atop Group A after scoreless draw against New Zealand

The match that started under stormy skies didn’t fully clear up for Canada’s Women’s National Team as they finished the night with a scoreless draw against a combative New Zealand team. It was enough however to reach the top of Group A rankings, for the time being.

“I thought that was a pretty entertaining match,” commented Canada’s Head Coach John Herdman in his press conference. “New Zealand were tough. I thought Canada were the better team, but we’ve got to find the back of the net. That’s our challenge going into the next game. The good news is, we’re still top of the group, we’ve got a positive goal difference, and we’re going into Montreal with some real clarity on where we’re at.”

After playing four short minutes, the teams were sent back to the dressing rooms following extreme weather alerts. Canada wasn’t phased out and came back out on the pitch looking strong and in control for the first quarter of play.

New Zealand however battled back and seemed to put pressure on the Canadian back four. The Ferns had high hopes in the 32nd minute when Allysha Chapman was cautioned for a strong tackle in the box, providing them with the golden opportunity of a shot for the penalty mark. Amber Hern stepped up but saw her shot hit McLeod’s crossbar, and the stalemate remained.

“We just have to hit the back of the net, reduce the pressure and then we can enjoy these football matches a bit more,” stressed Herdman.

Both sides exchanged chances, and in the end neither prevailed.

“We’ve only conceded three shots on target in two games, two clean sheets, and if our front five can start finding the back of the net, this Canada team is going to be decent, what wins you [FIFA Women’s] World Cup,” concluded Herdman.

Canada will now turn its focus to their last opponent of the Group, the Netherlands, whom they’ll face on Monday night (15 June, 19.30 ET / 16.30 PT) on the pitch at Olympic Stadium.

The team will travel on Friday, do some recovery work on Saturday before regrouping again for training in the new venue on Sunday. Canada’s official pre-match press conference will be streamed live on canadasoccer.com.

Canada sits on top of Group A with four points (1W-1D), closely followed by China PR and the Netherlands who each have three points following a win and a loss. A win against the Netherlands would guarantee Canada the top spot and a move out West for the round of 16, but a second place finish would still allow them to move on.

Tickets for Canada’s crucial match in Montreal are still available at fifa.com/canada2015.