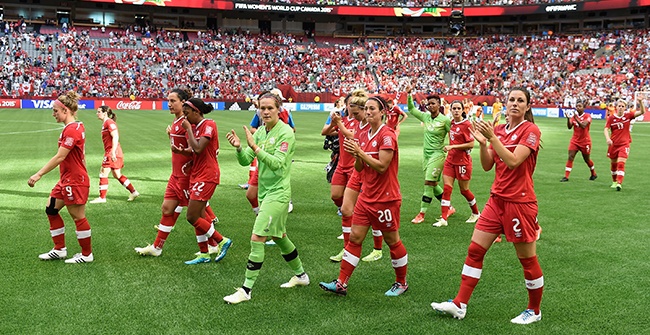 Canada show heart and fight as they bow out of WWC

Canada show heart and fight as they bow out of WWC

Canada WNT has left an indelible mark on sports fans in this country.

The dream may be over for Canada’s Women’s National Team at the FIFA Women’s World Cup Canada 2015™ but the team has left an indelible mark on sports fans in this country.

For two-straight games in Vancouver, crowds numbering in the range of 54-thousand came out not only to cheer, but also, to make themselves a part of tight-knit group of women that’s helped to grow the women’s game in Canada and truly put it on the sporting map.

“This is a real women’s football country,” said Head Coach John Herdman. “Those fans showed everyone around the world how to support the women’s game.”

England won on the night with two first half goals from Jodie Taylor and Lucy Bronze pacing them to a 2:1 victory over Canada at BC Place in Vancouver. But this Canadian team, as they’ve done for the last number of years, has engaged a new generation of players.

The amount of people walking around Vancouver these past few days with Canada gear with names like Sinclair and Schmidt on their backs has simply been astonishing.

The true impact of this team and this tournament may not be felt right away. But of the thousands of youngsters that has been so charmed by this group of players, there are undoubtedly so many who now dream of working hard, living a healthy life as they chase that desire to pull up their socks, lace up their boots and put on that Canada Red shirt.

Three years after they first dazzled the country at the 2012 Olympics in London, Canada less than a year away from embarking on another Olympic qualifying campaign. So while there is sadness and tears on this night, the never-ending carousel of this sports rolls on with new opportunities for these Canadian women to continue to entertain and inspire and set new dreams in motion.