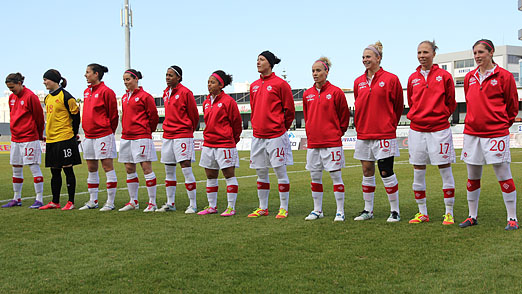 Canada will take on Germany 2011 foes France for a chance at Cyprus three-peat.

Canada is headed for a fifth-consecutive final at the Cyprus Women’s Cup after Emily Zurrer sealed the team’s passage through the group stages with a crucial goal in the 84th minute. The goal earned Big Red a 1:0 win over Netherlands on Sunday 4 March 2012 at the Ammochostos Stadium in Larnaka Cyprus.

After completing play in Group B with a perfect record of three wins in three matches, Canada will take on France in the final after the French dispatched England 3:0 in the decisive match in Group A.

Following the match against Netherlands, the Canadian players and staff stated that they were eagerly looking forward to taking on the France side that knocked Canada out of the FIFA Women’s World Cup Germany 2011. The 2012 match promises to be even more momentous for Big Red as it looks to capture the Cyprus Women’s Cup title for a third year running.

All six final classification matches will be played on 6 March at four different stadiums in Larnaka and Paralimini, Cyprus.

“It was always going to be a difficult game against the Dutch,” said Head Coach John Herdman after the match. “I thought that was the hardest I’ve seen this group of players work and if we can keep that going it’s going to put us in a great position going forward to the Olympics.

“It’s exciting, we are looking forward to playing the French as we know it will be a tough game. There’s something there that the girls will get up for.”

Zurrer, the goalscoring hero in Canada’s final group-stage match, is also looking at the final against France as an occasion for the team to redeem itself.

“We’re looking forward to playing France again,” said Zurrer. “After what happened at the the FIFA Women’s World Cup, we want to show them (of what) we’re made.”