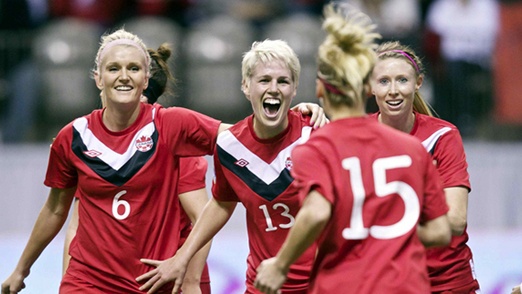 Canada will face Mexico in the all-important tournament semi-final on Friday 27 January.

Following a 4:0 win by USA over Mexico in Group B it is now confirmed that Canada will face the Mexicans in the all-important semi-final match at CONCACAF Women’s Olympic Qualifying at 20.00 (local kick-off) on Friday 27 January at BC Place in Vancouver.

Canada will need to defeat Mexico in the semi-final to book a place at the 2012 Olympic Games in London.

After clinching top spot in Group A with a 5:1 win over Costa Rica on 23 January, Canada watched-on eagerly as USA and Mexico squared off to determine first place in Group B on 27 January.

The Americans took an early lead courtesy of two quick goals by Carli Llyod and Heather O’Reilly and never looked in danger of giving up their advantage.

Llyod added another goal in the 2nd half to make it three-nl for USA before completing the hat-trick to seal the 4:0 victory for her side.

Full ticket details for Canada’s crucial semi-final showdown against Mexico on 27 January are available at: canadasocer.com/madeforthis

The match will also be broadcast live in Canada at 23:00 ET / 20:00 PT on a variety of Sportsnet HD platforms as well as online at Sportsnet.ca

Should Canada defeat Mexico on 27 January they would go on to face the winner of the USA v Costa Rica semi-final in the CONCACAF Women’s Olympic Qualifying final on 29 January in Vancouver.

Canada 2012: Mexico looks ahead to clash with Canada