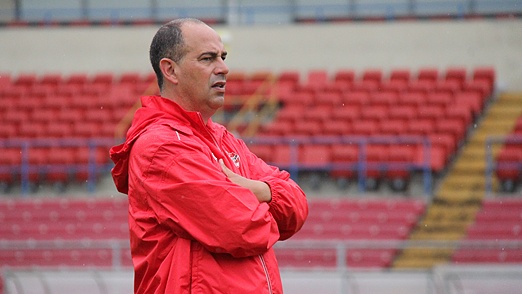 Match to be broadcast nationally on CityTV and Sportsnet ONE beginning at 20.30 ET / 17.30 PT on Tuesday.

Canada will take on Panama in what is expected to be a fiery FIFA World Cup Qualifiers clash on Tuesday 11 September 2012 at the Estadio Rommel Fernández in Ciudad Panama. After defeating the Panamanians 1:0 on Friday at BMO Field in Toronto, Canada will be looking to edge one step closer to a berth in the next round of the 2014 FIFA World Cup Brazil™ Qualifiers with a result away from home.

The Panama-Canada match kicks off at 20.00 local time (21.00 ET / 18.00 PT). A live Canadian broadcast will be available on CityTV and Sportsnet One, with the pre-match broadcast starting at 20.30 ET / 17.30 PT. Fans can also follow the action on Twitter: @CanadaSoccerEN; and can take-in the team’s build-up to the match on CanadaSocerTV.

“I have let the players know that we can get a result down here,” said Stephen Hart following Canada’s final training session ahead of the match. “I really hope we lay down a good performance. There will be distractions from the crowd and the conditions, but our players will only be focused on the football.”

CANMNT: Team looks ahead to special night in Panama

Canada currently occupy top position in Group C in the 3rd Round of the 2014 FIFA World Cup Brazil™ Qualifiers after Friday’s win over Panama. Previously in the group, Canada defeated Cuba 1:0 away from home and earned a 0:0 tie against Honduras at BMO Field in June. Only two teams from this group will advance to the CONCACAF Final Round in 2013.

The six-match semi-final round runs June through October, with Canada’s next home match on Friday 12 October at BMO Field in Toronto. Tickets to that Canada-Cuba match are available via ticketmaster.ca or by phone at 1.855.570.7500, with full information available on CanadaSoccer.com. Group discounts are available via marketing@soccercan.ca or 613.237.7678. Following the Canada-Cuba match, Canada will travel to Honduras for the last group fixture on 16 October.

For full coverage of Canada’s road to the 2014 FIFA World Cup Brazil™, fans can follow all the news at CanadaSoccer.com. Fans are also encouraged to connect with Canada’s national teams via Twitter.com/CanadaSoccerEN, Facebook.com/CanadaSoccer, Flickr.com/canadasoccer, and YouTube.com/CanadaSoccerTV.

CANMNT: Behind the scenes in Panama City