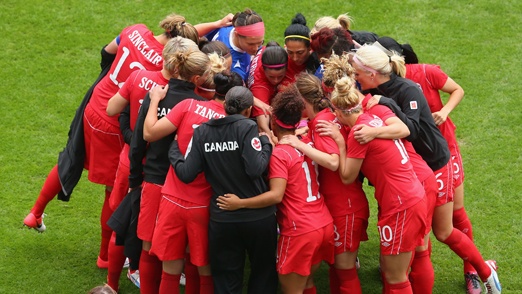 Canada will face host Great Britain in the London 2012 Women’s Olympic Football Tournament quarter-final this Friday 3 August. The two teams will meet at the City of Coventry stadium at 19.30 local, the last of four quarter-final matches across the United Kingdom on Friday night. The day’s four winners will advance to the semi-final phase which is set for Monday 6 August.

A full house of some 30,000 fans are expected to attend the Friday Canada-Great Britain match in Coventry. Back in Canada on television, the match can be watched live on TSN, RDS and CTVOlympics.ca at 14.30 ET / 12.30 PT.

Also on Friday 3 August, Sweden faces France in Cardiff (12.00 local), USA faces New Zealand in Glasgow (14.30 local), and Brazil faces Japan in Cardiff (17.00 local). The winners of Sweden-France and Brazil-Japan knock-out matches will meet in one semi-final in London while the winners of the Canada-Great Britain and USA-New Zealand knock-out matches will meet in the other semi-final in Manchester.