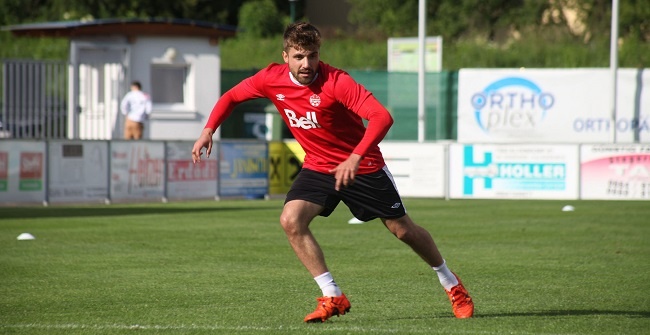 Canada will face Azerbaijan in an away Men’s International Friendly match this Friday 3 June in Austria. The match is part of a Men’s National Team camp that will help prepare Canada’s players for 2018 FIFA World Cup Russia Qualifiers in September, including the all-important final match of this semi-final round at BC Place in Vancouver on 6 September.

This marks Canada’s last chance to get together before the August-September window when Canada faces Honduras away (2 September) and El Salvador at home (6 September). As part of this 10-day June camp, Canada faces Azerbaijan on 3 June and Uzbekistan on 7 June. Both June matches will be broadcast live on canadasoccer.com and youtube.com/canadasoccertv.

“It is a big week coming up for us with games on Friday and Tuesday,” said Scott Arfield, now into his second camp with Canada Soccer’s Men’s National Team. “You take these training sessions and you try to implement what the head coach and his staff want for the games.”

After the June camp, players will return to their professional clubs where they will have less than three months of further individual preparation for the 2018 FIFA World Cup Russia Qualifiers. Canada features a mix of players who are either midway into their 2016 season or will soon be preparing for their 2016-17 season (with training camps to begin in June or July).

“Everything has been spot on in this camp,” said Julian de Guzman, Canada’s all-time leader in appearances. “Our main objective has been to go over the things that need work from our last matches against Mexico. This camp is a great way for us to prepare for the most important matches of our careers (in September).”

SUPPORT #CANADARED, BE CANADA’S 12th MAN
After an away match against Honduras on 2 September, Canada will come home to face El Salvador in a critical match on 6 September at BC Place in Vancouver. To help build a sea of #CanadaRED supporters, tickets to the match start as low as $25 (plus applicable fees). In addition, a special ‘Me+3’ offer will be available for this match. When purchasing three full price tickets in select sections, fans will receive the fourth one free. This offer is available via Ticketmaster.ca by selecting the ‘Me+3’ offer.