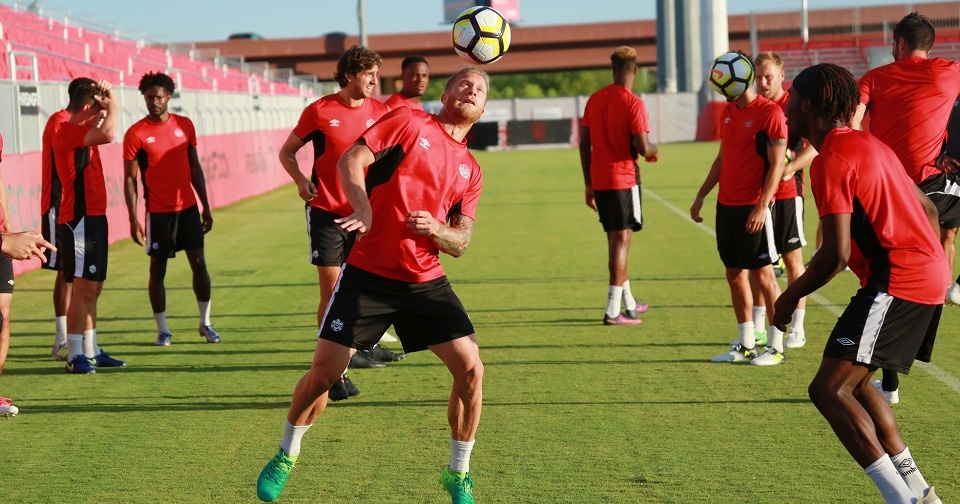 The Canada-Jamaica match on Thursday 20 July takes place at the University of Phoenix Stadium in Glendale, AZ

Canada Soccer’s Men’s National Team will have the country behind them when they face Jamaica in the quarter-finals at the 2017 CONCACAF Gold Cup. Soccer fans from across the country have rallied behind their team through an impressive undefeated streak at the confederation championship.

The Canada-Jamaica match on Thursday 20 July takes place at the University of Phoenix Stadium in Glendale, AZ. The match kicks off at 16.30 local, with a live broadcast on TSN2 and RDS (19.30 ET / 16.30 PT). Fans are encouraged to follow the Men’s National Team across all of Canada Soccer’s digital channels including Twitter, Instagram, Snapchat, YouTube, and Facebook.

We are going into tomorrow’s quarter-final as one big team in #CanadaRED #CANMNT says thank you for all of the support from back home. pic.twitter.com/Jv6tlrO17a

Canada have a young and dynamic squad, blending both experience and youth to produce an exciting Canadian team in 2017.

“I think collectively the team has done really well,” said Michael Petrasso, Canadian right back. “The young players are out there with no fear and I think that helps the squad. The experienced players can provide the young players that guide because they have been to these competitions before.”

Petrasso is making his competitive debut at the 2017 CONCACAF Gold Cup. He previously made two international “A” appearances in 2016 before playing all 270 minutes of the group phase of this year’s competition. His goal line save in the dying minutes of the first half of the group finale against Honduras was voted the CONCACAF Play of the Game.

“From that first win, we gained confidence,” said Samuel Piette, Canadian midfielder. “We are a group of players that isn’t afraid: we play with no fear and we push forward to get the result. It doesn’t matter how old or young you are because if you do well in training, you are going to get your chance.”

Like Petrasso, Piette came up through Canadian system and has featured in all 270 minutes for Canada through the group phase. They each benefitted from more than 200 days in Canada Soccer’s Men’s National Youth Program from the U-17 to U-23 level.

Davies is one of three Canadians who scored in the group phase, all of whom scored their first international goals. Davies scored twice against French Guiana and once against Costa Rica while both Scott Arfield and Dejan Jakovic scored against French Guiana. Arfield, Lucas Cavallini, and Anthony Jackson-Hamel have all recorded assists.

Surrounding Canada’s youth both on and off the pitch are veterans like Patrice Bernier, Milan Borjan, Marcel de Jong, Dejan Jaković, Tosaint Ricketts, and Adam Straith. Ten of Canada’s 23 players have participated in previous editions of the CONCACAF Gold Cup, including youngsters like Piette, Jonathan Osorio, Russell Teibert, and the recently added Cyle Larin.

CANADA UNDEFEATED IN 2017
Canada are undefeated in 2017 with three wins and three draws, including a 4:2 win over French Guiana, a 1:1 draw with Costa Rica, and a 0:0 draw with Honduras. In 23 international matches since the last CONCACAF Gold Cup in 2015, Canada’s overall record is 10 wins, seven draws, and six losses.

At the 2017 CONCACAF Gold Cup, Canada’s 23-man squad features an average age of just 26 years old, including 10 players who are 23 or younger. Of the 23 players, 18 of them featured in the Men’s National Youth Program, benefitting from more than 1,600 combined days from the U-15 to U-23 age group.

While 13 players are making their CONCACAF Gold Cup debuts, 10 of them are returning from previous editions, including Marcel de Jong who is taking part in his fifth CONCACAF Gold Cup. This combination of experience and youth in the Canadian squad has paid dividends not only on the pitch, but also in the development pathway for some of Canada’s top young talent.

CONCACAF Gold Cup
The CONCACAF Gold Cup is the official national team championship of the confederation. From 12 nations, the eight teams that play in the 19 and 20 July quarter-finals are: Costa Rica and Panama; USA and El Salvador; Canada and Jamaica; Mexico and Honduras. From that round, four nations will play in the semi-finals on 22 and 23 July and then the top two teams will face each other in the final on Wednesday 26 July.