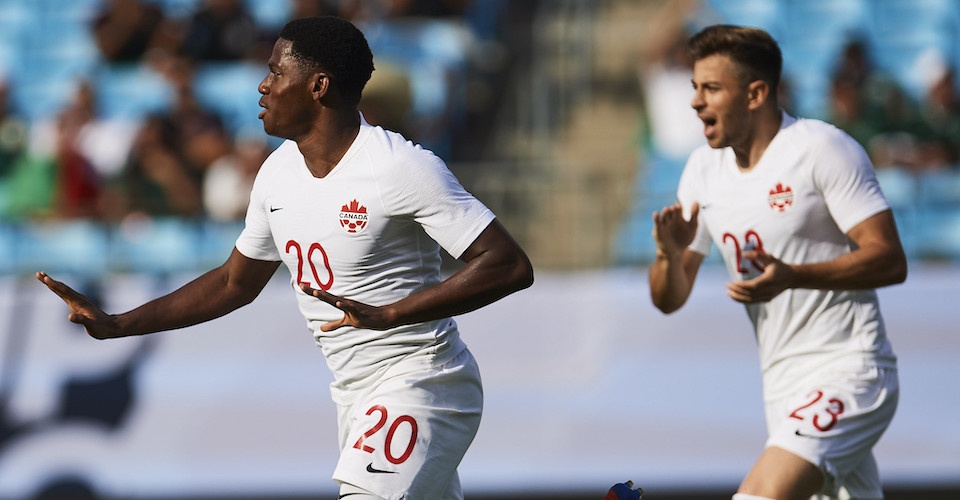 Canada qualifies for the Quarterfinals at 2019 Concacaf Gold Cup

Canada qualifies for the Quarterfinals at 2019 Concacaf Gold Cup

Canada took care of business with a record-setting performance in the group finale at the 2019 Concacaf Gold Cup. Canada won 7:0 over Cuba with hat […]

Canada took care of business with a record-setting performance in the group finale at the 2019 Concacaf Gold Cup. Canada won 7:0 over Cuba with hat tricks by both Lucas Cavallini and Jonathan David, the first-ever double hat trick performance by a Men’s National Team attacking duo. Junior Hoilett also scored for Canada.

The win earns a place in the Quarterfinal stage of the 2019 Concacaf Gold Cup to be played 29 June in Houston, TX. Across three group stage matches, Canada finished with six points and a 2-0-1 record, defeating Martinique 4:0, losing to Mexico 3:1, and winning 7:0 over Cuba. The Cuba victory set a Canada record for goals in a Concacaf Gold Cup match. Canada will face Cuba again in ten weeks when it hosts them in the Concacaf Nations League A home match to be played at BMO Field on 7 September in Toronto.

“I’m proud of the boys. It was one of those games where we had to take it to them and really keep our tempo high, said John Herdman, Canada Soccer’s Men National Team Head Coach. “We’ve just got to focus on what’s next. They guys are ready and we just have to keep moving in the right direction.”

Canada awaits the final results from Group B to determine who they will meet in the Quarterfinal round. Mexico defeated Martinique 3:2 on 23 June in the Group A finale in Charlotte, NC while Costa Rica and Haiti will battle on 24 June in Harrison, NJ to determine first place in Group B. Canada will face Costa Rica or Haiti on 29 June at 19:00 ET LIVE on TSN and RDS.

“Good result, good atmosphere. We always knew what our goal was coming into this tournament, we just want to continue to be positive, recover well and be ready for our Quarterfinal match,” said centre back Doneil Henry.  “I think our defence made it possible. We know what kind of quality we have up front, we have to be disciplined and patient. Credit to Cuba, they came out here with a lot of pride. We have a lot of respect for these guys as an opponent. We’re really excited for what we’ve got next. Every time we step on the pitch it’s an opportunity to show well for our country. While I’m here I want to continue to be positive and stay true to my colours.”

Canada showed their quality in the first half pushing wing backs up the pitch and moving the ball well through the midfield to find wide backs in space and in advanced positions up the pitch. Scott Arfield and Junior Hoilett frustrated the Cuban midfield and backline and Jonathan David and Lucas Cavallini were a threat throughout the half. David’s opening goal came through the backline as Derek Cornelius stepped forward and played a long ball up the wing to Junior Hoilett. After taking his space, Hoilett played a ball on a platter for David who sidefooted the ball into the Cuban goal.

After a spell of physical play, Lucas Cavallini exerted his presence and scored three consecutive goals.  His first goal came after a Cuban backline mistake nearly resulted in an own goal with Cavallini ensuring the ball was over the line after it went off the post in the 21’.  Just before half, Cavallini struck again off a David pass initiated by Alphonso Davies inside the six yard box in the 44’. Cavallini lept into the air and kicked out to nick it into the Cuban goal. Cavallini’s third goal came a minute into added time when he slid in the box to bury Davies’ pass off a wide left rush.

Early in the second half, Davies went on a long run with David trailing to allow for an overload in the Cuban box. Davies played the ball into the path of David who turned it on goal but it ricocheted before Junior Hoilett put it behind for Canada’s fifth in the 50’.

David added more goals to his first half opening marker scoring at 71’ and 77’. Off a Jonathan Osorio corner in the 71’, the ball fell to Scott Arfield atop the box whose shot bounced off a defender to the top of the box where David was waiting to drive it home. Just six minutes later, David was at it again pressuring the Cuban defence and shielding the player off the ball which Hoilett picked up and played to David who earned his hat trick.

David is currently the top scorer in the 2019 Concacaf Gold Cup with five goals. He has a total of nine goals and five assists in seven matches with the Men’s National Team. Cavallini has scored four goals in the tournament and has a total of nine goals and one assist over 14 matches for Canada. 2019 marks the first year that two players have had six or more goals with David and Cavalinni each registering six this year.

Canada’s starting XI featured Milan Borjan in goal, Marcus Godinho at right back, Doneil Henry and Derek Cornelius at centre back, Alphonso Davies at left back, and Scott Arfield, Samuel Piette, Jonathan Osorio, Jonathan David, Junior Hoilett and Lucas Cavallini from the midfield up through to the attack. In the second half, coach John Herdman replaced Henry with Kamal Miller (61’), Cavallini with Ashtone Morgan (61’), and Davies with Liam Millar (70’).