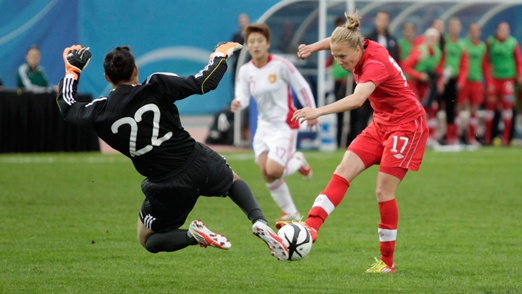 Some added-time magic by Christine Sinclair was the difference in a 1:0 victory over China PR on Wednesday 30 May in Moncton, NB. The late Sinclair goal off a Diana Matheson free kick provides a memorable send off for the Canadian women’s team, who were making their first appearance in New Brunswick in advance of their London 2012 Women’s Olympic Football Tournament.

Sinclair now has 14 goals in just 12 appearances this calendar season, the third-highest single-season total of her career. Her 134 career goals rank third all time behind Mia Hamm (retired, 158) and Abby Wambach (active, 135 as of Sunday night). As for goalkeeper Erin McLeod, it was the 22nd clean sheet of her career. In 12 international matches this season, Canada’s record is nine wins and three losses.

The event on 30 May was the first Canadian match staged at Stade Moncton 2010 Stadium, one of the venues for the upcoming 2015 FIFA Women’s World Cup in Canada. The match also allowed the Canadian Soccer Association to share its 100th anniversary with the soccer community in Atlantic Canada. With 7,514 fans in attendance, the Canada-China PR match set a new attendance record for an international soccer match in the province of New Brunswick.

Canada will participate in the London 2012 Women’s Olympic Football Tournament from 25 July to 9 August. This will mark Canada’s second participation in the Women’s Olympic Football Tournament, following a quarter-final finish at Beijing 2008. Following the match in Moncton, the Canadian team will head to Sandy, Utah, for an away Women’s International Friendly match on 30 June against the USA.