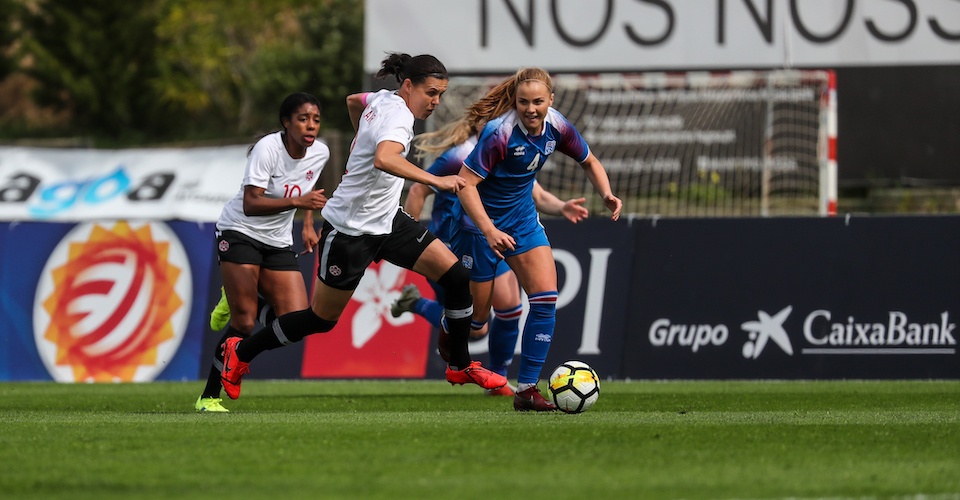 Canada Soccer’s Women’s National Team drew Iceland 0:0 to take a point from its first match of the 2019 Algarve Cup.  Canada dominated possession and had […]

Canada Soccer’s Women’s National Team drew Iceland 0:0 to take a point from its first match of the 2019 Algarve Cup.  Canada dominated possession and had multiple chances in the first half and continued their commanding play into the second half but Iceland was able to hold off Canada. Canada Soccer’s WNT will face Scotland next at the Algarve Cup on 1 March at 13:15 local (08:15 ET/05:15 PT).

“Today was a great performance from our team. A very, very dominant performance in every aspect of the game, but, the most crucial thing in the game, we didn’t succeed on. It’s something we need to work on. We need to be able to convert,” said Head Coach Kenneth Heiner-Moller. “We do know Iceland defends with a big heart. Iceland beat Scotland 2:1, and I expect a match a little like this. They are more technical in midfield, which we need to take in consideration. I hope for as good a performance as we just put on.”

Diana Matheson had the first chance of the game in 3’ getting through on goal, but, Iceland GK Sandra Sigurdardottir was able to cover the ball. Two minutes later, Janine Beckie had a chance inside the six-yard box, but Iceland was able to make a goal line save. Beckie had another great chance in the 17’ but put the ball just wide of Sigurdardottir’s net. Beckie was at it again in the 22’ after Jessie Fleming swung a cross in at the back post, but again Iceland were up to the task. Christine Sinclair had a shot blocked in the 31’ with Janine Beckie getting a few more chances before the teams went into halftime 0:0.

Canada again came out flying in the second half with Fleming playing a brilliant ball wide to Ashley Lawrence in the 51’, whose cross fell to Sinclair, but, again Sigurdardottir made the save. Nichelle Prince threaded Matheson into scoring position in the 62’, but, Iceland found a way to keep the ball out. Second half substitution Jordyn Huitema’s speed created a chance in the 80’, running down a through ball and creating an opportunity but Canada put the ball over the net. Beckie had a go from the top of the 18 in the 86’ minute that went just over the bar.

“We went in with the attitude to start out strong and I think we completed that task, unfortunately we didn’t put one of those away, but we got great quality chances in the first five minutes,” said Rebecca Quinn. “We’re getting those final acts and we’re getting good quality crosses in on goal. We got unlucky a few times today, so I’m sure in the next game we’ll slot a few in.”

Canada is now 1-0-1 against Iceland, having defeated the European nation on the way to their 2016 Algarve Cup victory. Canada are 6-0-1 against Scotland, with the only loss coming back in 2008.   Canada most recent match against Scotland was a 2-0 win at the Cyprus Cup as Canada prepared for the FIFA Women’s World Cup Canada 2015. Jessie Fleming, then 16 years old, scored her first goal for Canada on the night, while Christine Sinclair netted international goal number 152.

Canada will play a third and final match of the 2019 Algarve Cup on 6 March to determine its final rank in the tournament. The details and opponent will be determined based on the results of the first two matches.