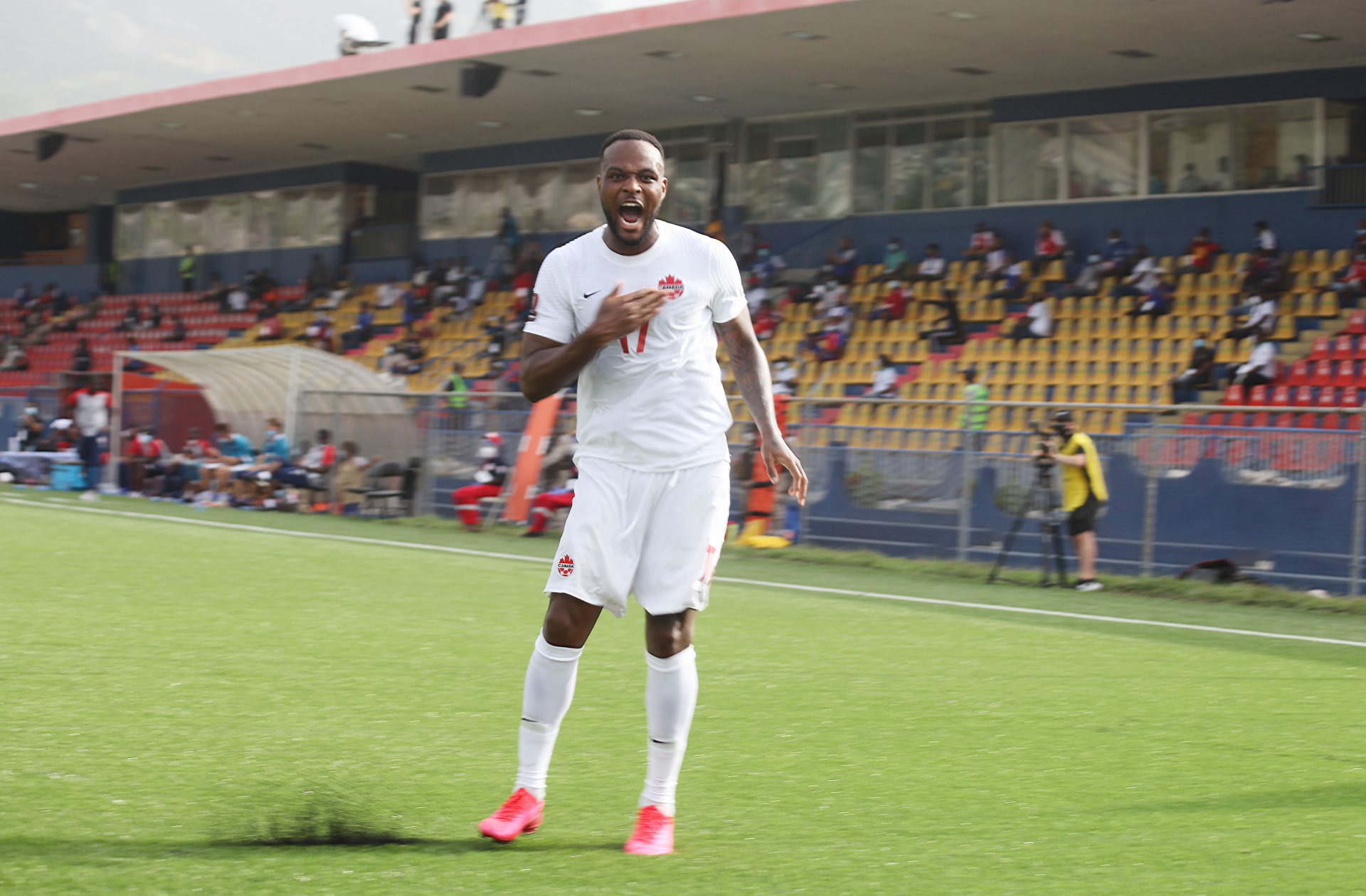 Canada open with crucial 1:0 win over Haiti in away leg of the Second Round of FIFA World Cup Qatar 2022™ Qualifying

Canada open with crucial 1:0 win over Haiti in away leg of the Second Round of FIFA World Cup Qatar 2022™ Qualifying

Canada Soccer’s Men’s National Team defeated Haiti 1:0 to earn an important first leg victory in the Second Round of Qualifying for the FIFA World Cup Qatar 2022. Cyle Larin’s goal in the 14’ earned Canada the critical away goal. Canada will now head back to Chicago for the second leg on 15 June looking to secure their spot in the Final Round.

Larin’s goal was the 14th of his international career and 10th in FIFA World Cup Qualifiers, moving him into second place behind Alex Bunbury (11) on Canada’s all-time goals list in the competition.

Canada started the game against an aggressive Haitian press earning them a yellow card in the 2’ as Pierrot Frantzdy chopped down Alphonso Davies. Centreback Scott Kennedy got his head up and played a brilliant ball over the top to Cyle Larin in the 5’ that was flagged for offside.

Canada took the lead that earned the win in the 14’. Richie Laryea found room on the wing and played back to Stephen Eustáquio who laid off for Mark-Anthony Kaye. Kaye played through to Jonathan Osorio whose ball into the box skipped over Haitian GK Johny Placide and Larin made no mistake.

Larin nearly made it 2:0 in the 18’ on a direct ball over the top, but Haitian goalkeeper Placide was up to the task. Defender Alistair Johnston made his presence known meeting the Haitian aggression with a well time, tough tackle in the 28’.

The Hatians’ forceful play against Alphonso Davies continued in the 41’ as Jeppe Friborg picked up a card after dragging Davies down by the jersey after a burst of speed from the winger.

Canada’s best chance to equalize came early in the second half as Jonathan David was played through on goal. With a clear path to goal, David worked to get onto his favoured left foot and Placide was able to block the shot from the Canadian attacker in the 52’.

Just a minute later Haiti forced a massive save from Canadian goalkeeper Milan Borjan. Borjan’s back-pedalling tip kept Canada’s lead. Borjan again made a big save in the 57’ after Pierrot was played over the top.

Davies and David, who were instrumental in the 4:0 victory in the last match against Suriname, nearly found that spark again in the 75’ after Davies showed his pace on the ball in the middle of the park. Davies played David wide left at the top of the box but the tough angle shot was handled by Placide.

A late free kick for Stephen Eustáquio found second half substitute Lucas Cavallini who knocked it down for Scott Kennedy with a pass that wasn’t quite heavy enough and Placide took the ball away.

A pair of late corners allowed the Canadians to eat up the final minutes of injury time to secure the 1:0 victory.

“It was a very good win and we wanted to have a clean sheet as well, we accomplished that on turf which was difficult for the lads but we stuck together and won,” said Stephen Eustáquio. “You just have to be smart and secure at the back. We have players in our attack that can decide the game like Cyle did today. The early goal gave us confidence of course and we just had to manage from there.”

Canada’s starting XI featured Milan Borjan in goal, Alistair Johnston at right back, Steven Vitória at centre back, Scott Kennedy at left back, and Richie Laryea, Alphonso Davies, Stephen Eustáquio, Mark-Anthony Kaye, Jonathan Osorio, Jonathan David and Cyle Larin from the midfield up through to the attack. In the second half, coach John Herdman replaced Kaye with Samuel Adekugbe (61’), Laryea for Tajon Buchanan and Larin for Doneil Henry (78’), and David for Lucas Cavallini and Osorio for Samuel Piette (82’).

It will be an exciting yet busy summer of soccer for Canada Soccer’s Men’s National Team Program in 2021. On the heels of FIFA World Cup Qatar 2022™ Qualifiers in June, Canada will participate in the 30th anniversary edition of the Concacaf Gold Cup, with their Group B match-es scheduled in Kansas City on 11 July against Martinique, 15 July against a yet-to-be-determined Caribbean nation from the preliminary round, and 18 July against USA. The top-two nations from Group B advance to the final round with the Quarterfinals on 24 July, the Semifi-nals on 29 July, and the Final on 1 August.