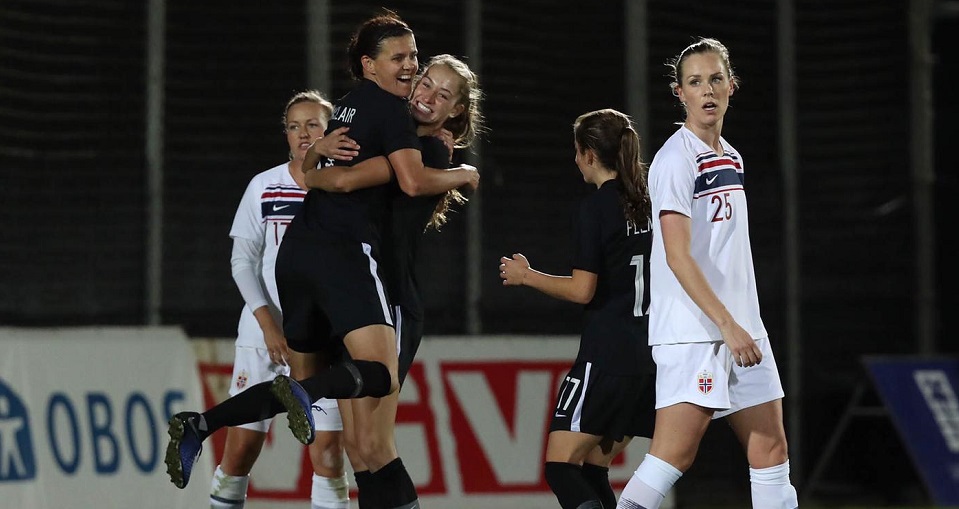 Canada opened 2019 with a 1:0 win over Norway in its first official match of the FIFA Women’s World Cup France 2019™ year. Captain Christine Sinclair […]

Canada opened 2019 with a 1:0 win over Norway in its first official match of the FIFA Women’s World Cup France 2019™ year. Captain Christine Sinclair earned Canada the win with a second half goal, her 178th international goal in her 275th appearance for Canada bringing her just seven goals away from the all-time FIFA goal scoring record.

Canada got off to a strong start with Ashley Lawrence getting forward to play Nichelle Prince in for the first chance of the game in the 3’. Prince, whose run of form has seen her score four goals in the past six matches, was unable to get the shot on frame. Lawrence played Prince through again in the 7’, this time getting Jessie Fleming in on goal, but, Canada did not get the shot off. After Sinclair saved a long ball in, the ball fell back to her in the box in the 14’ and forced a save from Norwegian GK Hjelmseth for the best chance of the first half.

A minute later, Canadian Goalkeeper Stephanie Labbé was forced in to her first action saving a shot in close on the counter. After a winding run to bring the ball out of the back from Ashley Lawrence, a pass back to Kadeisha Buchanan was then sent over the top to Deanne Rose who played the ball into Jessie Fleming for a chance that did not make it through in the 27’. Buchanan spent some time on the sideline and Norway were forced to make a change a right back before Jessie Fleming and Nichelle Prince both missed out on chances and the first half ended 0:0.

Following a handful of early second half substitutions, Canada began to push forward with purpose. Ashley Lawrence played a ball into the box in the 64’ that was taken by Hjelmseth with Sinclair at the doorstep. Second half substitute Jenna Helstrom’s left footed cross into the box in the 66’ was headed home by captain Christine Sinclair. Stephanie Labbé earned her 25th clean sheet late when Norway were pressing in the 89’ and a scramble in the box lead to a shot which Labbe touched onto the cross bar with the rebound landing on the netting for a goal kick.

“It feels great, I think there was something in our game that look very promising. For this team to get where we are in such a short period of time is great,” said Kenneth Heiner-Møller. “There are definitely some things we need to today up, but, getting the win is a good feeling, going into 2019 with a win against Norway.”

Many of Canada Soccer’s Women’s National Team players have been training in Spain since 8 January and two weeks together has provided an excellent opportunity for the squad to reconnect and continue to build the on-field partnerships that helped lead to a second-place finish at the 2018 Concacaf Women’s Championship in October 2018.

“It’s been a great camp for us just starting the season, and to get a win against quality opposition that’s heading to the World Cup as well is a huge bonus and we’re heading home happy,” said Sinclair.” We pride ourselves on our subs making an impact, and Hellstrom is a perfect example of that coming in and within a couple of minutes put in a perfect cross. We have a very deep team and you saw that today.

“We’re confident, especially if this is where we’re starting at this year,” Sinclair added. “A lot of us aren’t in season right now, and we’re just sort of starting and we just beat Norway where most of them are in the middle of the season so we’re confident, we still have some work to do, but, we’re building.”

“This camp provided us with an opportunity to bring in many players and get a good look at all of them in match action, which is critical as we build towards the FIFA Women’s World Cup this summer,” said Heiner-Møller.  “Testing players in different formations and on-field partnerships continues to provide us with information and insight that will help Canada field the best possible team come June.   In all, this camp was very successful, but we know there is still a lot of work to do, so we are eager to regroup in February for the Algarve Cup.”

Canada Soccer’s Women’s National Team is looking forward to a busy year ahead of the month-long FIFA Women’s World Cup France 2019™ that kicks off 7 June and runs until the final match on 7 July.

Canada’s next camp will begin in late February ahead of the 2019 Algarve Cup.  Drawn into Group A, Canada will face Iceland on 27 February and Scotland on 1 March before playing a final match on 6 March to determine its final rank in the tournament. Canada won the Algarve Cup in 2016 and placed second in 2017.

Additional camp information and matches will be confirmed in Spring 2019.

Canada at the FIFA Women’s World Cup France 2019
Canada, ranked fifth in the FIFA World Rankings, kick off their FIFA Women’s World Cup France 2019™ tournament on Monday 10 June when they face 46th ranked Cameroon at Stade de la Mosson in Montpellier, France. Canada will then travel to Grenoble for their second group match on Saturday 15 June against 19th ranked New Zealand at Stade des alpes. Canada conclude the group phase in Reims on Thursday 20 June with a match against Netherlands, ranked seventh, at Stade August-Velaune.

Canada Soccer’s Women’s National Team
Canada are two-time Olympic bronze medal winners (2012 and 2016) and two-time CONCACAF champions (1998 and 2010). At Rio 2016, Canada Soccer’s Women’s National Team were the first Canadian Olympic team to win back-to-back medals at a summer Olympic Games in more than a century and the only FIFA Member Association to repeat on the podium.

Canada Soccer’s Women’s National Team have previously made six FIFA Women’s World Cup appearances and qualified five times (1995, 1999, 2003, 2007, 2011) as Canada hosted the record breaking 2015 edition where 1,353,506 fans attended matches, setting a new total attendance record for a FIFA competition other than the FIFA World Cup™.  The highest attended match of the tournament was 54,027 for the Canada vs. England quarter-final in Vancouver.