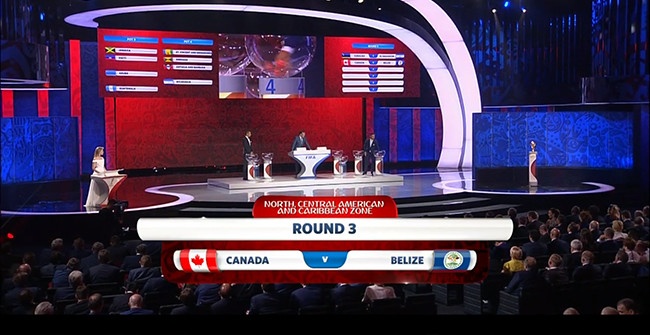 The road to Russia is set for Canada’s Men’s National Team.

In the preliminary draw for the 2018 FIFA World Cup Russia™ that took place in St. Petersburg, RUS, on Saturday, Canada found out who they’ll play in the third and fourth rounds of qualifying in the CONCACAF region.

“We can say Belize is a team that has made positive and continuous progress,” said Head Coach Benito Floro. “That’s good for us because it won’t be easy to pass this eliminatory round. We need to focus on these first two games with a lot of intensity.”

The winner of that tie will move into Group A for the fourth round of qualifying. It’s a tough group that features regional powers Mexico, Honduras and the winner of a tie between Curacao and El Salvador. The first two games of that round take place in November.

“Speaking about the group in which we could be included if we beat Belize, I think that all the teams have a similar level,” said Floro. “It’s true that Mexico is one step over the rest. But we need to trust in our players because history has demonstrated that it’s possible to qualify for the hexagonal.”

The top two teams from that round move into the ‘Hexagonal,’ the final round of qualifying in the CONCACAF region. The top three teams from that six-team group qualify for the 2018 FIFA World Cup while the fourth place team will go to a home-and-away intercontinental playoff against a team from Asia.

“Of course we’re only going to focus on Belize right now because if we don’t win that, it doesn’t matter to think about the groups,” Floro admitted. “For us it’s very important and we can’t have any doubts about that.”

Tickets for the 4 September match between Canada’s Men’s National Team and Belize at BMO Field in Toronto will go on sale to the public on Tuesday 4 August via Ticketmaster.ca. Details, including pre-sales and group discounts, will be released later this week on canadasoccer.com.