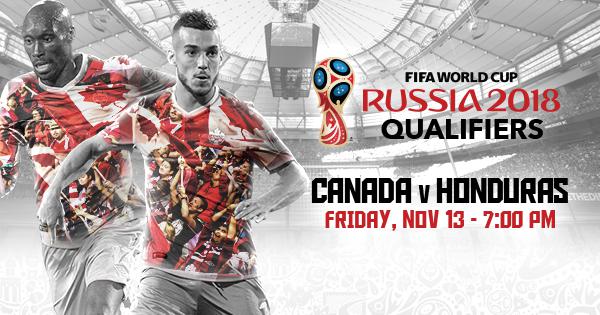 Tickets to this 2018 FIFA World Cup Russia Qualifiers match will go on sale this Friday 18 September (10.00 PT) via Ticketmaster.ca.

Canada’s Men’s National Team will open the next round of 2018 FIFA World Cup Russia™ Qualifiers at BC Place in Vancouver. The all-important, international soccer fixture will pit Canada against Honduras on Friday 13 November 2015 in the first of six Round 4 matches.

Tickets to this 2018 FIFA World Cup Russia Qualifiers match will go on sale this Friday 18 September (10.00 PT) via Ticketmaster.ca. Tickets start as low as $25 (plus applicable fees). Full ticket details for the Canada v Honduras match, including special and group offers, are available at canadasoccer.com/canMNTvHON.

“Our soccer fans in Vancouver can get behind our Canadian team as they continue their journey to the 2018 FIFA World Cup Russia on Friday, November 13 at BC Place,” said Canada Soccer President Victor Montagliani. “Home support plays such a big role in international soccer, especially when facing an opponent like Honduras – one of our fiercest rivals dating back to the early 1980s.”

Canada will want to build a sea of red support in true #CanadaRED spirit.

A special ‘Me+3’ offer is also available for this match. When purchasing three full price tickets in select sections, fans will receive the fourth one free. This offer is available via Ticketmaster.ca by selecting the ‘Me+3’ offer.

In addition, discounts of up to 30% are available for groups of 10 or more for tickets in select sections. To secure group tickets, group organizers need to complete the online group ticket order form.

“We are glad to play in Vancouver, especially since each time I see a match from inside this modern stadium or by television, I realize how people support the home team,” said Canadian Head Coach Benito Floro.

In CONCACAF Round 4, Canada will play six matches, with both a home and away encounter against Honduras, El Salvador and Mexico. Matches will be played over three international windows, with the first two matches 13 November at home against Honduras and 17 November on the road against El Salvador.

Canada then faces Mexico twice in March 2016 and El Salvador/Honduras again in September 2016.

Home support in Vancouver will be crucial because, as noted by coach Floro, “Honduras and El Salvador are two similar teams, so they will be our direct rivals to qualify for the next stage.”

So far this year, Canada’s Men’s National Team has posted a record of five wins, four draws and two losses in 11 international matches. There have been seven clean sheets, including a national record shutout streak from March to July (564 minutes). Since 2010, the Men’s National Team has posted eight wins, five draws and two losses in matches played in Canada.

In choosing Vancouver, BC as the host of the first match of the 2018 FIFA World Cup Russia™ CONCACAF semifinals, Canada Soccer recognises the city’s rich international soccer history, most recently serving as the host city for the Final Match of the record-breaking FIFA Women’s World Cup Canada 2015™. The 13 November 2015 match will be Canada’s first men’s international match at BC Place since the stadium was refurbished in 2011.