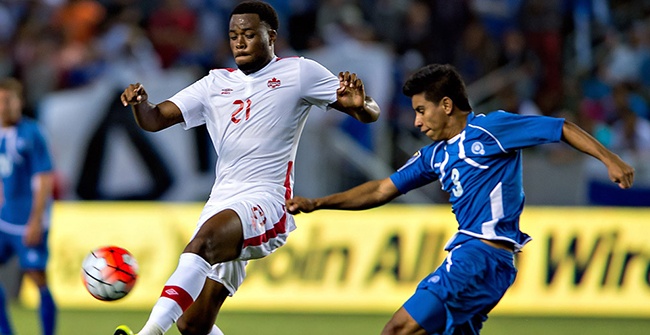 Canada MNT started the Gold Cup with a scrappy 0:0 draw against El Salvador

Canada’s Men’s National Team opened the 2015 CONCACAF Gold Cup with a scrappy 0:0 draw against El Salvador on Wednesday night at the Stub Hub Centre in Carson, California. Canada’s Cyle Larin had the best opportunity late in the first half of the tightly contested match as he rounded the El Salvador goalkeeper only to see his shot fly wide of the open goal.

Head Coach Benito Floro and his players had spoken in the lead-in to the match of their anticipation for the opportunity test the development of the program in meaningful Gold Cup matches and it was on the defensive side of the ledger that Floro was most pleased.

“Both teams dominated in specific areas,” said Floro. “The outcome of the match was fair. I am pleased with our defensive performance. The caliber of the players was very good.”

The match was effectively a home match for the El Salvadorians as the majority of the 22,468 fans in attendance were dressed in El Salvador blue and created a lively environment through the game.

With the clean sheet on Wednesday night, Canada now has now recorded five consecutive shutouts dating back to its 1:0 victory over Guatemala in March.

Defender David Edgar, starting with the captain’s armband for the first time in his international career, made several key blocks and along with his teammates on the Canadian backline kept El Salvador in check for most of the night.

“I thought we were solid throughout the XI, said Edgar. “We dealt with their counterattack, they have some skillful players on their team. We pressed them quite well, we had some good opportunities. I think nil-nil was a fair result, if not us edging it. Our strikers held their heads up high. They made some chances and they will get back in those positions again. We just have to keep working as a team and the goals will come.”

In the opening match of Group B, played prior to Canada v El Salvador at the Stub Hub Centre, Jamaica overcame a 2-1 halftime deficit to draw Cost Rica 2:2. As a result all four teams in Group B sit even with one point each after the first match day.

The Canadians had stressed the importance of getting off to a positive start having lost the first match of the past two Gold Cup competitions in 2013 and 2011 and subsequently failing to advance past the group stage on both occasions. With the draw, Canada will head into its second group stage match this coming Saturday 11 July against Jamaica in Houston knowing that every point will be key.

Canada will complete the group stage against Costa Rica on 14 July at BMO Field in Toronto as the Gold Cup makes its debut on Canadian soil. Canadian supporters can purchase tickets to the double-header which also features El Salvador v Jamaica via Ticketmaster.ca starting at $25 (plus applicable fees).

Fans can follow Canada’s Men’s National Team via Twitter @CanadaSoccerEN using #canMNT and share their support by tagging messages and pictures with #CanadaRED. More details of the team’s results and activity will also be shared via Canada Soccer’s social media accounts.