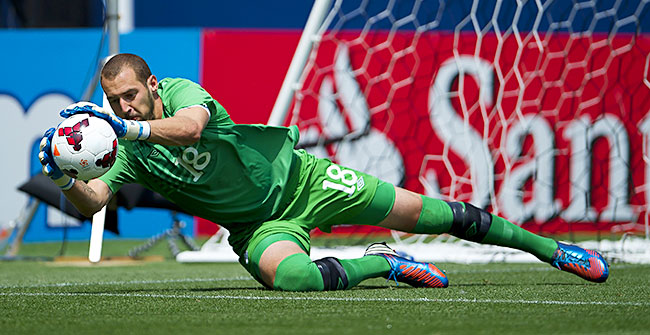 Canada MNT sets up camp ahead of Bulgaria, Moldova matches

Canada MNT sets up camp ahead of Bulgaria, Moldova matches

A squad of 24-players has been called in as Canada’s Men’s National Team gets set to take to Austria for their first two International Friendlies of 2014.

The squad comprised mostly of European-based players contains many of the most familiar names in the Canadian men’s game, but, as always, a healthy contingent of younger players who will look to take on more responsibility in the coming years has also been drawn in.

Veteran players like Atiba Hutchinson and Julian de Guzman will be joined by a healthy mix of youngsters like Samuel Piette, Daniel Stanese, and Caleb Clarke, as the development of the senior team continues one-year out from the next CONCACAF Gold Cup and the likely resumption of World Cup qualifying.

The team arrives into camp on Sunday 18 May before their first training session on Victoria Day. They will train for four days before taking on Bulgaria, a team ranked 73rd in the latest FIFA rankings.

That game will take place at the Sonnenseestadion in Ritzing, AUT.

The team will get three more days in camp together before getting back on the field at the Stadion SVU Mauer in Mauer, AUT on Tuesday 27 May against 99th-ranked Moldova.

Both games will take place at 17.30 local time / 11.30 ET / 8.30 PT. There is no broadcast for either game but match highlights will be available on CanadaSoccerTV.

This will be the second camp of the year for Canada. In January, a squad composed largely of younger players took part in a training camp in Sunrise, Florida, USA, and came away as 2:0 winners over the Fort Lauderdale Strikers of the North American Soccer League.