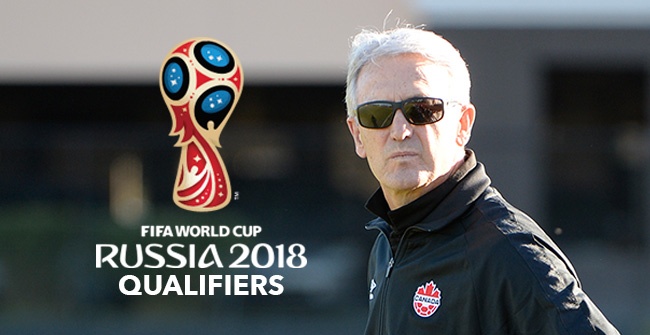 Canada MNT selects 23 for CONCACAF Preliminary Round in June

Canada MNT selects 23 for CONCACAF Preliminary Round in June

Midfielder Will Johnson and newcomer forward Tesho Akindele on the roster

With the next FIFA World Cup qualifying odyssey set to begin for Canada’s Men’s National Team, Head Coach Benito Floro has named his 23-man squad that will look to get things off on the right foot with a home-and-away series against Dominica.

As Canada enters the second CONCACAF Preliminary Round of qualifying for the 2018 FIFA World Cup Russia™ against one of the smaller countries in the region, Floro has included plenty of familiar names for a Canada squad that isn’t short on experience with the likes of Atiba Hutchinson, Julian de Guzman, and the return of midfielder Will Johnson.

One newcomer to the Canadian fold for this camp and games is forward Tesho Akindele, who plays for FC Dallas in Major League Soccer.

“The players and the staff are ready for these official games,” said Floro. “These first eliminatory games will be more important in regards to testing our capacity to remain concentrated on the opposition. It’s very important.”

The team convenes in Orlando on 7 June for a few days of training in Florida prior to flying to Roseau, Dominica, on 10 June. They play at Warner Park in Roseau on 11 June before flying to Toronto the next day to prepare for the second leg at BMO Field in Toronto on Tuesday 16 June (kick off 19.30 local).

The home-and-away series kick-starts a busy summer for the team as the FIFA World Cup qualifiers will lead into July’s 2015 CONCACAF Gold Cup.

Should Canada win the series against Dominica, they’ll go into the draw for the third and fourth rounds of qualifying. The draw for those rounds takes place on 25 July 2015, and would see another home-and-away series in the third round in September before entering the fourth round in a four-team round robin competition that would start in November.

“With qualifying starting, our objective now is to win games,” said Floro. “So my objectives are always the same: win the games playing our style. This summer, we want to qualify for the next FIFA World Cup qualifying stage, we want to win the CONCACAF Gold Cup, and we want to qualify for the Olympics, which is very important for Canada Soccer as the Olympic team will look to form the base of the National Team in the future.”

Tickets for the 16 June return leg of the series, to be played at BMO Field in Toronto, ON, are available on canadasoccer.com/canMNTvDMA.