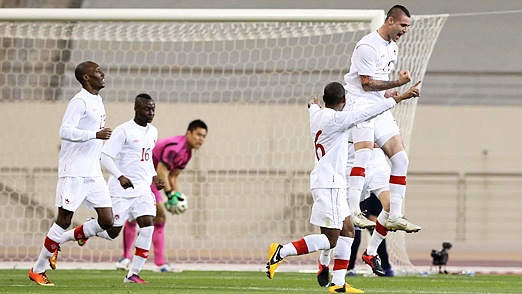 Canada MNT ready to take on Costa Rica in Edmonton

Canada MNT ready to take on Costa Rica in Edmonton

Tickets to the Canada-Costa Rica match remain available for purchase on Ticketmaster.ca or by visiting canadasoccer.com/canMNTvCRC.

Canada’s Men’s National Team concluded their last training session on Monday 27 May in preparation for the Men’s International Friendly against Costa Rica set for 28 May, at Commonwealth Stadium, in Edmonton, AB (kick off 18.00 local time).

On Monday morning, Interim Head Coach Colin Miller had most of his squad together, with only Tosaint Ricketts still set to arrive later in the day, for the hour-long session where the team worked on its tactical orchestration ahead of Tuesday night’s game.

“The group’s attitude has been fabulous, the sessions we’ve had have been high tempo. Just the way I want them!” said Miller. “The boys do look sharp and I’m confident we’ll be competitive come Tuesday night.”

The Canada-Costa Rica friendly, Canada’s first home fixture of the 2013 campaign, will be broadcast coast-to-coast in Canada on all four Sportnet regional networks (20.00 ET / 17.00 PT). Fans will also be able to follow live coverage on Twitter: @CanadaSoccerEN. Highlights from the match will be avialable on CanadaSoccerTV.

“It is very exciting for me and my family to get to play here in Edmonton”, said Randy Edwini-Bonsu. “I haven’t played here since 2008, so I’m really excited and proud to play in front of my friends and family and for them to get to see me play live. I have a good group of them coming to the stadium tomorrow and I know they will cheer me on.”

Tickets to the Canada-Costa Rica match remain available for purchase on Ticketmaster.ca or by visiting canadasoccer.com/canMNTvCRC.

The match in Edmonton is part of Canada’s continued preparations for the 2013 CONCACAF Gold Cup to take place in July. Canada will kick-off the tournament on 7 July against Martinique in Pasadena, CA; will then travel to Seattle, WA for an 11 July fixture against Mexico; and will then close-out the group stage with a match against Panama in Denver, CO on 14 July.