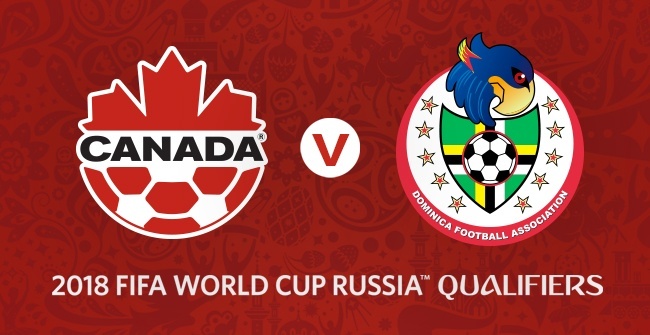 Canada MNT off and running in Qualifying win over Dominica

Canada MNT off and running in Qualifying win over Dominica

CanadaMNT is certainly not going to complain about a two-goal advantage as they head home for a game at BMO Field on Tuesday night.

It could have been quite a bit more but Canada’s Men’s National Team is certainly not going to complain about a two-goal advantage as they head home for a game at BMO Field on Tuesday night.

Cyle Larin scored one and earned a penalty for another as Canada was more than comfortable in their 2:0 win over Dominica. They would have liked to have a few more goals to make the second 90 minutes that much more comfortable but they’ll certainly know that their preparations should see them through to the third round of CONCACAF qualifying for the 2018 FIFA World Cup Russia ™.

“We developed a strong pressing game, and at the same time we have had at least 12 or 13 scoring chances,” said Head Coach Benito Floro. “Unfortunately we only scored once from open play and the penalty. The result was not correspondent with the play but it was good.”

Canada now has a three-game winning streak and a four-game unbeaten streak and look to push that even higher before getting into the CONCACAF Gold Cup next month.

Roseau, Dominica was scorching during the day but come game-time, the conditions were much more comfortable, albeit a bit muggy and still warm. What really sapped the legs tonight was the pitch as it was very wide and very long on what is a surface usually used for cricket.

Canada was patient in holding much of the ball but had a tough time trying to beat a Dominica defence that seemed happy to sit just about every player behind the ball.

Heading into the second leg of the series, Canada will look to apply what they learned on Thursday and carve open their opponents and will hopefully get a push from home support.

“We’ll prepare the same (for the game in Toronto) because this is the second half of the eliminatory so we’re going to play Dominica in front of our home support and we need to play very well,” said Floro. “We have to score enough goals to be happy and hopefully enough to give two or three players other chances to play but it has to be a very good game for us.”