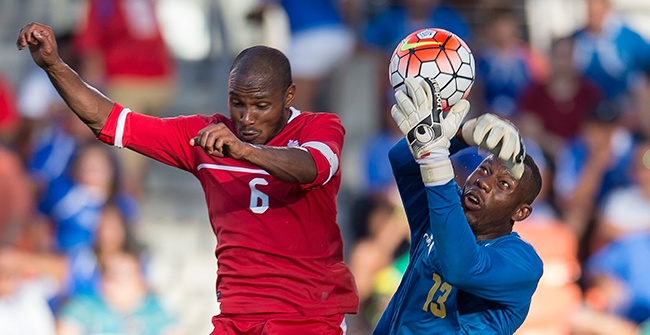 Both sides came into the match knowing the importance the result would have on their chances to advance to the knock stages of the biennial confederation championship.

“We need to analyse the full game,” said Head Coach Benito Floro. “Consider that in the first half we had opportunities but Jamaica was at a different level than us. It is Important for us is to understand that this is a good experience as in the first half we played well. We did not play well in the second half but it is a good performance, we fought a lot. We worked a lot for the 85 minutes.”

The teams had to battle the intense Texas summer heat as temperatures rose to nearly 40 degrees Celsius at pitch level just prior to kick off in Houston.

The Canadian squad was given a boost as Julian de Guzman returned from the injury that kept him out of Canada’s Gold Cup opener against El Salvador to take his regular place in the centre of midfield. The vastly experienced de Guzman seemed to have a calming effect on the side in the early stages as Canada returned to the possession and passing game that they had demonstrated in the matches leading into the Gold Cup.

“In the first half we had a few good opportunities and couldn’t put them away, said de Guzman. “From then on we were fighting to stay in the game. We gave away a lot of energy in the first half. There were too many times we were giving the ball away and in that heat it makes things very difficult. In the second half we were a bit gassed but some of the guys that came in like Russ (Teibert) and Marcus Haber gave us energy and I thought they did well. In the end we lost a little bit of concentration and conceded the goal that put us behind in the group.”

Canada will now travel to Toronto for its last group stage match versus Costa Rica on Tuesday 14 July at BMO Field knowing that a victory is required to ensure qualification to the knock out stages of the competition.

“It just comes down to us getting a win against Costa Rica and the one advantage we have is that we’re playing at home,” said de Guzman. “Going into Canada will give us confidence to get a win. It’s still there for us, I know the guys won’t feel happy about the result (v Jamaica) and it’s just a matter of bouncing back. We know that we’ll have the crowd behind us. We still believe that we can walk out of this group with four points.”