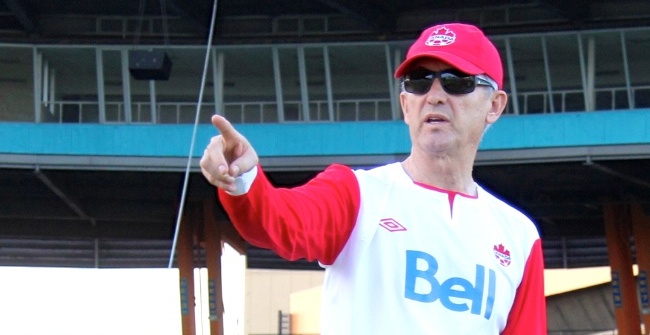 As they head into a full schedule of competitive games this summer, Canada’s Men’s National Team will be looking to build even more momentum as they take on Puerto Rico on Monday at the Estadio Juan Roman Loubriel in Bayamon, PUR.

Coming off a 1:0 win over Guatemala on Friday, Canada has a chance to roll into competitive action with back-to-back wins and they’ll be the favourite as the last time the two teams met at this venue, Canada came away with a 3:0 win in a FIFA World Cup Qualifier.

But Puerto Rico isn’t a team that plays a lot of games for Canada to study, so there’s a bit of an unknown quantity to Monday’s opponent.

“The little problem we have is we only have one game of Puerto Rico’s to analyze them tactically,” said Head Coach Benito Floro after Canada trained at the stadium on Sunday evening.

“But we suppose it’s a good team due to a result against Spain that was only a 2:1 game for Spain.”

The team found out while training on Monday that their first opponent in FIFA World Cup Qualifying for the 2018 FIFA World Cup™ will be Dominica and those games will take place in June.

Confidence is growing with the team and another win and a solid performance heading into competitive games will help a team that’s starting to rise at the right time.

“We need to press a lot (against Puerto Rico),” said Floro. “But when we win the possession of the ball, we’ll need to control it and it will be very important to play with a lot of two-touch football.”

The two teams have only faced each other twice all time. Apart from the aforementioned 3:0 win in Puerto Rico on 6 September 2012, they played to a scoreless draw at BMO Field in another World Cup Qualifier on 11 October 2012.