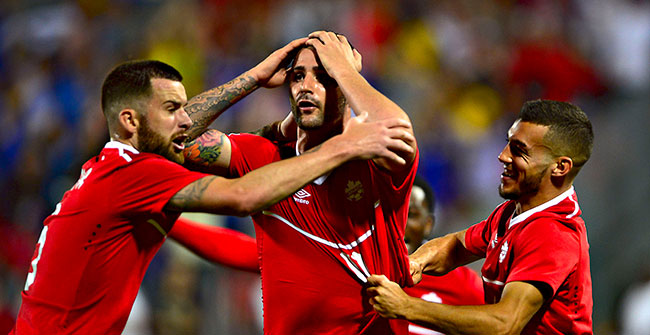 Canada’s Men’s National Team were eliminated from the 2015 CONCACAF Gold Cup following a hard fought 0:0 draw with Costa Rica on Tuesday night at Toronto’s BMO Field. Despite playing their most complete match of the competition the Canadian side were once again unable to capitalize on their scoring opportunities against an experienced Costa Rican side.

“I understand that it’s a disappointment because always we want to win,” said Canada head coach Benito Floro following the match. “We must be proud of our players. It is true that we are not happy with the result but we are happy with our players because they are fighting a lot. Our aim was to go through as long as possible because we need to play a lot of official games. For me and for my staff this Gold Cup was a test, a real test, and we consider the test to be correct, not negative. More positive than negative.”

Canada was again left to rue a series of missed scoring opportunities against Costa Rica. In the first half Marcus Haber broke through the Costa Rican defence only to see his low drive parried by the goalkeeper from 8 yards out and Maxim Tissot’s free kick eluded everyone in the box before hitting the outside of the post. Canada’s best chance of the second half came following a scramble in the Costa Rican box however Andre Hainault’s goal bound shot was cleared off the line.

Throughout the competition, Canada demonstrated an extremely organized and defensively sound structure having only conceded once in three matches, a 92nd minute heartbreaker to Jamaica in the team’s second match. When called upon, Canadian goalkeeper Kenny Stamatopoulos made several excellent saves and marshalled his defence well which featured a promising central pairing of David Edgar and Dejan Jakovic.

“It’s quite a somber dressing room obviously because we came here quite confident of proceeding to the next round,” said Edgar. “I’m really proud of everyone in the dressing because of the effort we put in and the performances. From a defensive point of view we’ve not conceded again against a team that is higher ranked then us. We’ve got to take positives from that and move on. On another day we could’ve had the goals.”

The Canadian squad will now look ahead to the next round of 2018 FIFA World Cup Russia Qualifying which is set to take place this coming September. Canada will learn their opponent at the official draw on 25 July in St Petersburg Russia. Floro and Canada will hope to have several key contributors back in its line-up for the all-important qualifiers.