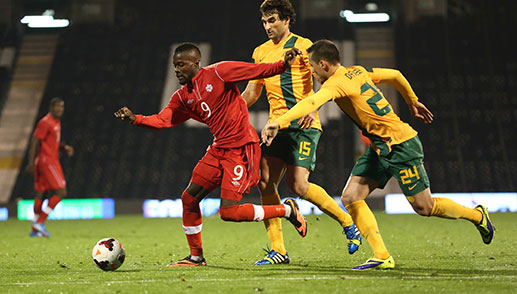 Canada has announced its 22-man roster for the final two friendly matches of the year.

Canada has announced its 22-man roster for the final two friendly matches of the year for Canada’s Men’s National Team, which take place on 15 November and 19 November in the Czech Republic and Slovenia, respectively.

It’s will be a challenging close to 2013 for Canada as they face two highly rated opponents to wrap up the calendar year. First up is a game against the Czech team in a game to take place in Olomouc, CZE at 17.00PM local time (11.00 ET / 8.00 PT).

“From here to the first official games [qualifying matches], it’s important to focus on our level of play,” said Canadian Head Coach Benito Floro. “It is necessary to pay attention in how we defend and attack so for me the best result is to take it step by step to improve our level.”

Prior to, and between the games, Canada will be based in Bad Waltersdorf, AUT for the training portion of the camp.

Included in the squad is Karl W. Ouimette, who’s received his first call-up to the senior team after putting himself on the map in his second season with the Montreal Impact of Major League Soccer.

Fellow defender Nana Attakora also makes his return to the Canadian roster. Attakora had provisionally been on the roster for this past summer’s CONCACAF Gold Cup but he had to pull out due to injury.