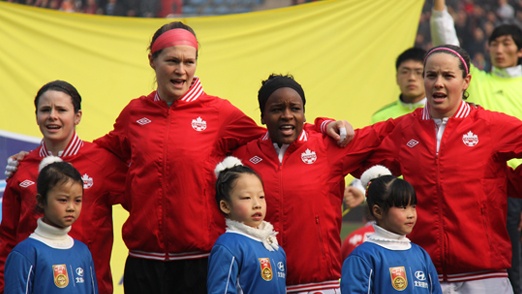 Canada WNT to take on Korea Republic on Monday.

Canada opened the tournament with a 1:0 win over hosts China PR, while opponents Korea Republic were defeated 2:0 by Norway.

For Head Coach John Herdman, the test against Korea Republic will be about building on Canada’s strong second-half performance during the opening-day win against China PR and ensuring that the team keeps firmly focused on its long-term goals.

“Our second half performance against China PR was very controlling. We have taken a step forward – but the key is to take another step and keep pushing the players to do certain things that can be very uncomfortable,” said Herdman.

“We need to continuously push our players to improve their technique and their decision-making skills to the highest level.

“If we continue to play with that philosophy – we may not win every game – but we will be taking this team closer to where it needs to be in 2015.

Fans will be able to track the match following limited live coverage on Twitter. Full match highlights and post-match reaction will be uploaded to CanadaSoccerTV after the game.