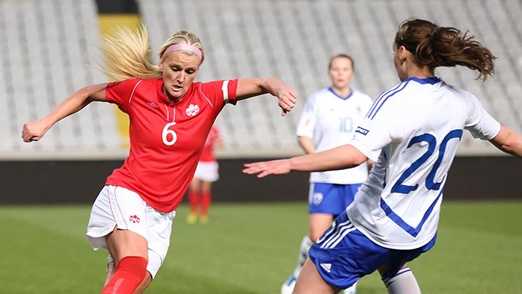 Canada looking to head into final with perfect record

Canada looking to head into final with perfect record

Canada have already qualified for the final at the 2013 Cyprus Women’s Cup but Head Coach John Herdman has said that his team will be looking to closeout group play with a third consecutive win at the tournament.

Fans will be able to follow the match live on Twitter: @CanadaSoccerEN. Pre and post-match video coverage, including full match highlights, will be available on CanadaSoccerTV.

“Our focus is on the final – but we are hoping to go into the championship game with nine points and another strong performance under our belt,” said Herdman.

The Canadian coach has stated that Monday’s match against the Netherlands may provide an opportunity for some different players to come into the team.

“There will be a resting strategy to ensure our senior players are fresh for the final,” said Herdman.

“The Dutch actually rested some of their key players in their second game at the tournament to ensure that their team are in peak condition for the match against us.

“This will be another strong test for the players we put out there tomorrow.”

After picking up a maximum six points from its opening two games at the Cyprus Cup – Canada have clinched first place in Group B with a game to spare and will now await the result of Monday’s England-New Zealand fixture (14.30 local kick-off) to learn which team they will play in the final.

New Zealand only need a draw to claim top spot in Group A; meanwhile England will need to win the game to book a place in Wednesday’s final against Canada.