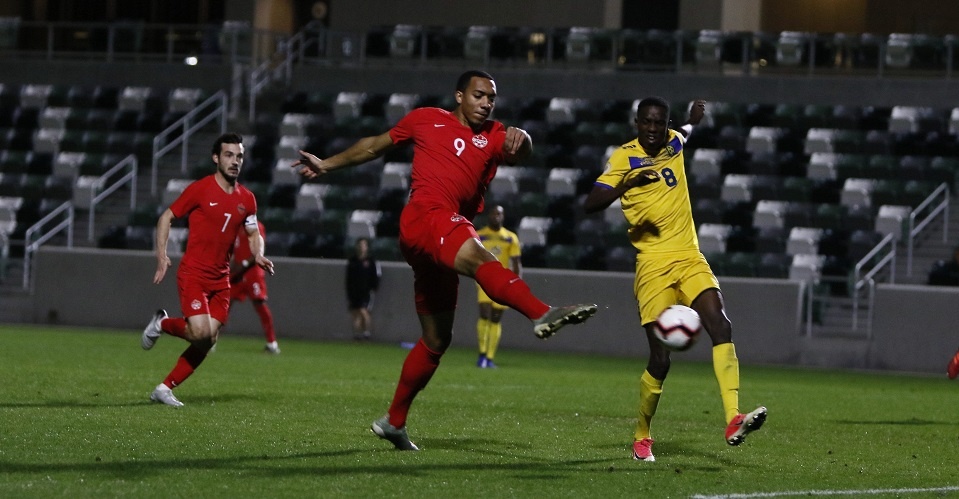 Canada kick off 2020 season with 4:1 win over Barbados

Canada kick off 2020 season with 4:1 win over Barbados

Canada opened their 2020 international season with a 4:1 victory over Barbados in a Men’s International Friendly match in California. Veterans Tosaint Ricketts, Tesho Akindele and […]

Canada opened their 2020 international season with a 4:1 victory over Barbados in a Men’s International Friendly match in California. Veterans Tosaint Ricketts, Tesho Akindele and Jonathan Osorio scored in the first half before debutant Theo Bair scored Canada’s fourth goal in the second half. It marked the fourth consecutive year that Canada Soccer’s Men’s National Team opened their season with a victory and it was their 11th win in the past 14 international matches since the start of 2018.

“The boys responded well tonight as we haven’t had long together, but the organisation and intensity was evident,” said John Herdman, Canada Soccer’s Men’s National Team Head Coach. “I was particularly happy with the fluidity in the attacking third and our commitment to the high press given that many players are coming off pre-season. It was a night in which we were able to build depth in our squad and take a result to start the year on a positive note.”


Canada created multiple chances throughout the match. In the seventh minute after Akindele hit the post, Ricketts knocked the ball in for a 1-0 lead. Ten minutes later, it was Jay Chapman’s turn to hit the post, but the ball stayed out. Just a couple of minutes later, Akindele had another big chance, but Barbados goalkeeper Kishmar Primus made the save.

In the 33rd minute, Jay Chapman headed the ball to Tesho Akindele who spun and fired it on goal for a 2-0 lead. Barbados then made it 2-1 on an Armando Lashley penalty after which Canada nearly scored again on a Chapman shot that hit the post. Finally in the dying minutes of the first half, Osorio made it 3-1 after a pass from Chapman.

In the second half, Canada made six substitutions and maintained their lead before debutant Bair made it 4-1 in the 77th minute. There were a couple of other close calls in which an Osorio shot and later a Ricketts header knocked the arms and hands of Barbados players.

Canada will play Barbados again on Friday 10 January before  facing Iceland on Wednesday 15 January. Canadian fans will be able to watch the matches live on CanadaSoccer.com can and can follow the team across Canada Soccer’s digital channels on Facebook, Instagram and Twitter, including behind-the-scenes coverage throughout their January camp abroad.

Canada started Maxime Crépeau in goal, Marcus Godinho at right back, Manjrekar James and Kamal Miller at centre back, Samuel Adekugbe at left back, and Jay Chapman, Jonathan Osorio, Tosaint Ricketts, Tesho Akindele, Liam Fraser and Captain Samuel Piette from the midfield up through to the attack. In the second half, coach Herdman replaced Piette and Osorio with Shamit Shome and Russell Teibert (57’), Chapman and Ricketts with Jayden Nelson and Charles-Andreas Brym (67’), Akindele with Theo Bair (71’) and Fraser with Noble Okello (75’).