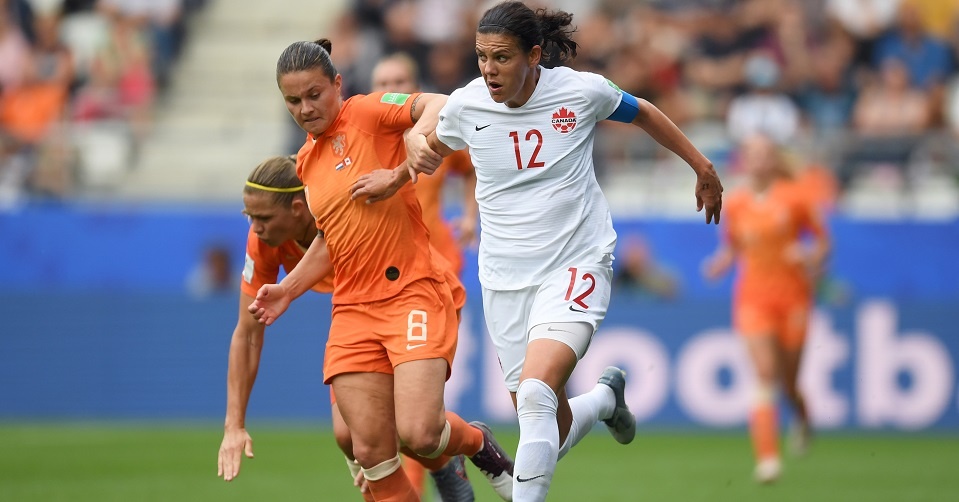 Canada will face Sweden in the Round of 16 at the FIFA Women’s World Cup France 2019™ after finishing second in Group E with six points. […]

Canada will face Sweden in the Round of 16 at the FIFA Women’s World Cup France 2019™ after finishing second in Group E with six points. Canada defeated Cameroon and New Zealand before falling 2:1 to Netherlands in the group stage finale. Against Netherlands, Player of the Match Christine Sinclair leveled the score 1-1 in the 60th minute before the Dutch’s Lineth Beerensteyn scored the winner in the 75th minute. Anouk Dekker opened the scoring for Netherlands in the 54th minute.

The Round of 16 match will be played on Monday 24 June at Parc des Princes in Paris at 21.00 local. The knockout match will be broadcast live on CTV, TSN and RDS at 15.00 ET / 12.00 PT. Extended coverage is featured across Canada Soccer’s digital channels including Facebook, Instagram and Twitter. Fans are encouraged to follow Canada Soccer’s Women’s National Team every step of the way by using the social media handle #CANWNT.

“I know if we play to our best, we can beat everyone and that includes anyone who we may face in the next rounds,” said Kenneth Heiner-Møller, Canada Soccer’s Women’s National Team Head Coach. “We were trying to win this match ‎because that is what we do and we do very well. ‎We need to learn from this game, shift quickly and focus on the next task. We are only looking forward.”

Canada played Netherlands to a 0-0 halftime draw, although they thought they had a penalty in the opening minute of the match. Janine Beckie was taken down on her run into the box, but the help of the Video Assistant Referee determined that the foul occurred just outside the box. From the resulting foul, Christine Sinclair’s free kick was stopped by the Dutch wall.

In the second half, Netherlands took advantage of a foul wide of Stephanie Labbé’s goal. In the 54th minute, the free kick was lofted into the back post, with Anouk Dekker heading home. Canada were able to equalize in the 60th minute after Jordyn Huitema’s ball wide to Ashley Lawrence allowed Lawrence to play a perfect ball to the back post to a waiting Sinclair who made no mistake. It was the 182nd international goal of Sinclair’s career, leaving her just three back of the all-time record.

Lineth Beerensteyn’s winner in 75th minute was scored at the back post on a cross from Danielle Van Lunteren.

“We have a massive game coming up in four days, so in a way this was a wake-up call for us going into the Round of 16,” said Sinclair. “The Dutch team are very talented and have some world-class players. It took us some time to get into the game and find our rhythm. We were disappointed with the result, but proud of how we grew into the game.”
Canada started Stephanie Labbé in goal, Ashley Lawrence at right back, Kadeisha Buchanan and Shelina Zadorsky at centre back, Allysha Chapman at left back, and Desiree Scott, Sophie Schmidt, Jordyn Huitema, Janine Beckie, Jessie Fleming and Captain Christine Sinclair from the midfield up through to the attack. In the second half, coach Kenneth Heiner-Møller replaced Sinclair with Adriana Leon (68’), Chapman with Jayde Riviere (69’), and Scott with Rebecca Quinn (79‘).

CANADA AT THE FIFA WOMEN’S WORLD CUP FRANCE 2019™
Beyond the group phase, two or three nations from Canada’s group will advance to the Round of 16 with those initial knock-out matches to be played from 23-25 June. Beyond the Round of 16, the Quarter-finals are 27-29 June, the Semi-finals are 2-3 July, and the FIFA Women’s World Cup France 2019™ Final is 7 July.
CANADA AT THE FIFA WOMEN’S WORLD CUP : http://canadasoccer.com/?t=project&sid=1272
Fans are encouraged to be part of Canada’s journey at the FIFA Women’s World Cup™ from 10 June to 7 July by watching all the action live on TSN and RDS. Fans can also follow the Women’s National Team both on and off the pitch across Canada Soccer’s digital channels including CanadaSoccer.com, Facebook, Twitter, and Instagram.
“Heading into an away FIFA Women’s World Cup, we hope that the echo from our Canadian fans back home will carry us through our month in France,” said Kenneth Heiner-Møller, Canada Soccer’s Women’s National Team Head Coach and Women’s National EXCEL Director. “It is so special to play in a FIFA Women’s World Cup. You don’t get this moment back. That could be a pressure for some, but it can also provide excitement. We know we have the support from back home and that is very important for us.”

OLYMPIC MEDAL WINNERS & CONCACAF CHAMPIONS
Canada are two-time Olympic bronze medal winners (2012 and 2016) and two-time Concacaf champions (1998 and 2010). In all, Canada have participated in seven consecutive editions of the FIFA Women’s World Cup™ (1995 to 2019) and three consecutive editions of the Women’s Olympic Football Tournament (2008 to 2016). At Rio 2016, Canada Soccer’s Women’s National Team were the first Canadian Olympic team to win back-to-back medals at a summer Olympic Games in more than a century.
WOMEN’S NATIONAL TEAM: https://www.canadasoccer.com/women-s-national-team-p144312
Canada Soccer’s Women’s National Youth Teams, meanwhile, have won four Concacaf youth titles: the 2004 and 2008 Concacaf Women’s Under-20 Championship, the 2010 Concacaf Women’s Under-17 Championship, and the 2014 Concacaf Girls’ Under-15 Championship. Canada have qualified for seven editions of the FIFA U-20 Women’s World Cup (including a silver medal at Canada 2002) and all six editions of the FIFA U-17 Women’s World Cup (including a fourth-place finish at Uruguay 2018).
SUMMER OF SOCCER: TOGETHER WE RISE
Canada’s National Teams have embarked on an incredible month of competition during the FIFA Women’s World Cup France 2019™ and the 2019 Concacaf Gold Cup. Your National Teams are united as “Together We Rise” with the momentum for our game stronger than ever. We urge Canadians to rally behind your National Teams as our Canada Soccer Nation strives for best-ever performances.
TOGETHER WE RISE: https://www.canadasoccer.com/together-we-rise-p162202
Two teams, one badge, standing shoulder to shoulder.