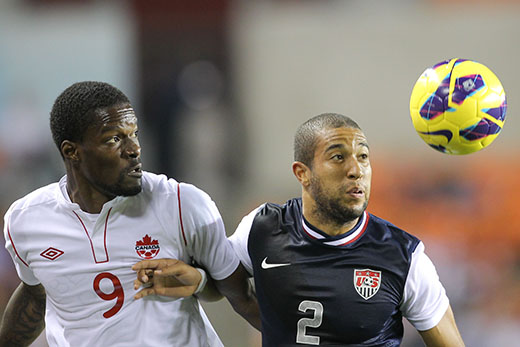 A young Canadian team put in a mature performance to earn a 0:0 draw against USA.

A young Canadian team put in a mature performance to earn a 0:0 draw against USA in a Men’s International Friendly in Houston, TX on Tuesday 29 January.

Canada was resilient under spells of American pressure but did well to create chances of its own as well.

Dwayne De Rosario had arguably the best chance of the match, but his volley was beaten away by USA goalkeeper Sean Johnson in the 6th minute.

After a season-opening loss to Denmark, Interim Head Coach Colin Miller was pleased with the way his players responded against the Americans.

“We were disappointed with aspects of our performance on Saturday but the boys showed everything you would expect of Canadian football in terms of heart, passion and endeavour tonight,” Miller told CanadaSoccerTV after the match in Houston.

“I’m very proud of the players, everyone has been totally committed since I’ve arrived.”

Canada’s next scheduled fixture is a Men’s International Friendly against Japan to take place in Doha, Qatar on 22 March.