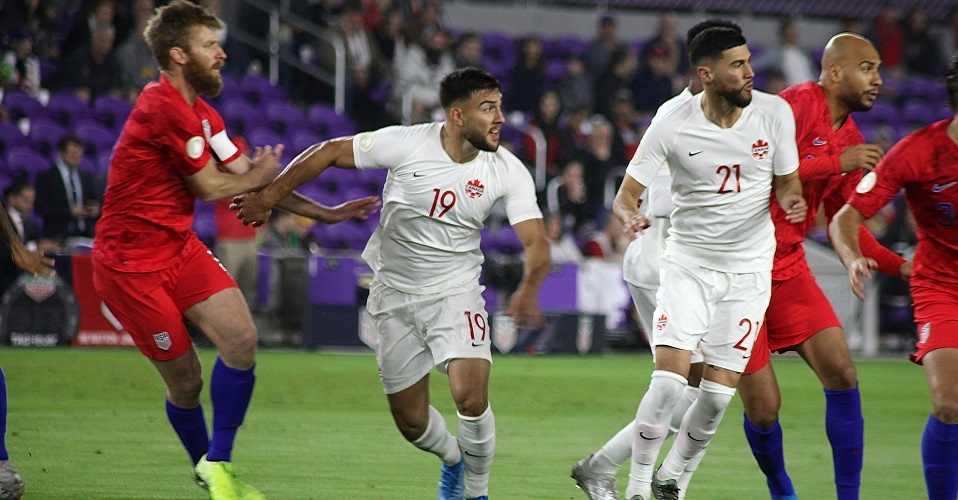 Canada hold but a three-point group lead after an away 1:4 loss to USA in their Friday night Concacaf Nations League A international soccer match. Steven […]

Canada hold but a three-point group lead after an away 1:4 loss to USA in their Friday night Concacaf Nations League A international soccer match. Steven Vitoria was the lone goalscorer as Canada finished with nine points from four matches in group play.  USA closes out their four-match schedule with an away match against Cuba on Tuesday 19 November needing a victory to secure first place in Group A and a spot in the Final Four.

“Credit to the USA as they were clinical with their 12 shots to our 11 and they came away with four goals,” said John Herdman, Canada Soccer’s Men’s National Team Head Coach. “We will learn from this, but there’s enough in our performances over the two games that tells us that we are right there with them.”

The 15 November match wraps up Canada’s 2019 international season, having won a joint-record six competitive matches over the course of the season including a quarter-final finish at the 2019 Concacaf Gold Cup and three wins in Concacaf Nations League A.

Canada held 64% of the possession against USA on Friday night and completed 82% of their 520 passes. Over the past two years, Canada have won 10 of 13 matches and scored in a Men‘s National Team record 13 consecutive international ”A” matches.

USA’s three goals in the first half were scored by Jordan Morris in the second minute, Gyasi Zardes in the 23rd minute, and Aaron Long in the 34th minute. Across 90 minutes, USA scored on four of their five shots on target.

Canada came out strong in the second half and kept pushing forward, finally cutting the lead in the 72nd minute shortly after winning a corner kick. From the Junior Hoilett corner, Jonathan Osorio at the near post headed back before Vitoria headed it in at the back post. It was Vitoria’s second international goal.

“The boys kept going and I was proud of their attitude, they came with belief that they could win the game and they left it all out there,” said Herdman. “At this level, games are won and lost on set pieces and transitional moments. We lost in these areas tonight.”

USA added to their lead with a late goal in the 89th minute, a second by Zardes.

In back-to-back matches against USA, Canada won the opener at home 2:0 on 15 October at BMO Field in Toronto with goals by Alphonso Davies and Lucas Cavallini. Canada also won both at home and away against Cuba, with six goals scored at home on 7 September and one more scored away on 10 September.  Canada has qualified for the 2021 Concacaf Gold Cup and will remain in Concacaf Nations League A with their nine points in Group A.

“We came here to face a strong American team, like we did a month ago in Toronto,” said Steven Vitoria. “There are a lot of lessons to be taking from here, we will learn from this. One night will not put into question all the work that has been put into this.”

Canada’s starting XI featured Milan Borjan in goal, Richie Laryea at right back, Steven Vitoria and Doneil Henry at centre back, Alphonso Davies at left back, and Samuel Piette, Mark-Anthony Kaye, Jonathan Osorio, Scott Arfield, Jonathan David and Lucas Cavallini from the midfield up through to the attack. In the second half, coach Herdman replaced injured Doneil Henry with Derek Cornelius, Cavallini with Junior Hoilett, and Kaye with debutant Stephen Eustaquio.

The Friday 15 November match was played in front of 13,103 fans at Exploria Stadium in Orland, FL, USA,