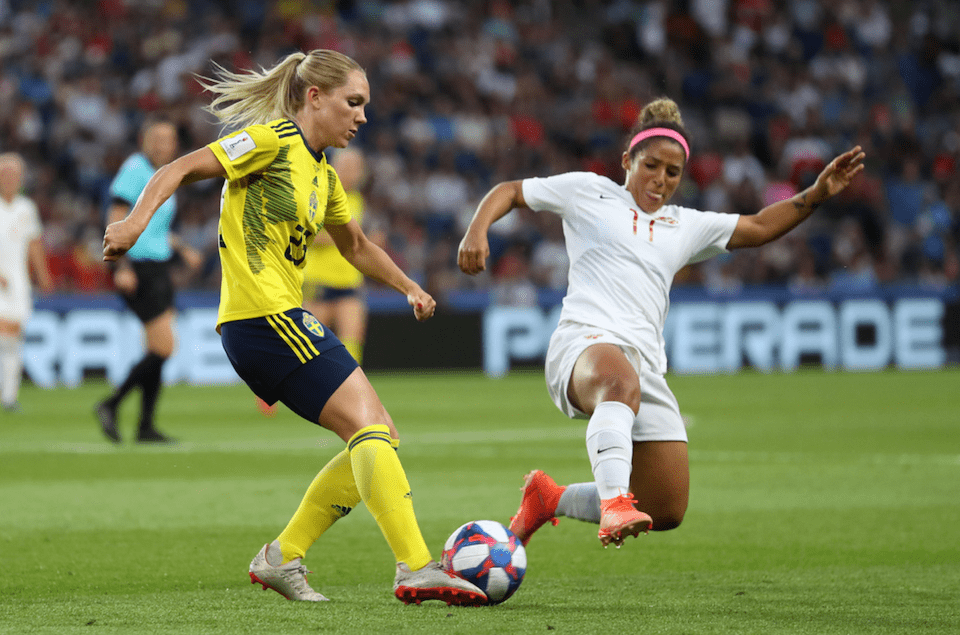 Canada fall to Sweden 0:1 in the Knockout Phase at the FIFA Women’s World Cup France 2019™

Canada fall to Sweden 0:1 in the Knockout Phase at the FIFA Women’s World Cup France 2019™

Canada left it all on the pitch before a narrow 0:1 defeat to Sweden in the Round of 16 at the FIFA Women’s World Cup France […]

Canada left it all on the pitch before a narrow 0:1 defeat to Sweden in the Round of 16 at the FIFA Women’s World Cup France 2019™. Canada created several chances and held the better part of possession, but were ultimately stopped by a Stina Blackstenius second-half goal and Hedvig Lindahl penalty save.

This marked Canada’s seventh consecutive participation at the FIFA Women’s World Cup™ and third trip to the Knockout Phase.

“We only had one request to leave it all out on the pitch and we did that,” said Kenneth Heiner-Møller, Canada Soccer’s Women’s National Team Head Coach. “I’m proud of the team (because) I think they did a fantastic job. We didn’t get the result we wanted and it’s very disappointing.”

“I think this is an exciting group and we have a lot of young players that have a bright future that have many more matches in front of them,” said Heiner-Møller. “Just being at an event like this will make them ready for the next time. I think the program that we have at Canada Soccer helps push that development. Having players go to the FIFA U-17 Women’s World Cup and FIFA U-20 Women’s World Cup is important for this program. We had the third youngest team here so the future is very bright.”

Sweden’s Stina Blackstenius scored in the 55th minute on a long ball in behind Canada’s defence. Canada had a chance to tie the game in the 69th minute as Janine Beckie stepped up to take a penalty kick after Desiree Scott’s shot hit a Swedish defender’s arm in the box. Beckie stepped up to place a ball hard and low to the right of Swedish GK Hedvig Lindahl who guessed correctly and stretched to put the ball wide of her net. With wave after wave in attack to close the game through seven minutes of added time, Canada worked for an equalizer but Sweden held on for the win.

Canada held the majority of possession in the first half. Ashley Lawrence, Nichelle Prince and Jessie Fleming had positive spells wide right swinging balls in the box. Allysha Chapman found space on the left wing moving into the attacking third multiple times in the first half in combination with Beckie. Shelina Zadorsky, Kadeisha Buchanan and Sophie Schmidt held the backline at times as Sweden’s wide defenders moved up the pitch to create opportunities. The teams went into halftime even at 0:0.

“To our Canadian fans, thank you for the continued support,” said Canadian captain Christine Sinclair. “It has been an amazing ride this World Cup and for me having family in the stands for every game has been incredible. I just wish we could have played a few more matches. You think of the veterans on this team, our goal has been to inspire the next generation. Hopefully some little kids watching the game tonight will dream of playing for Canada and one day win the World Cup.”

“I think that we’ve shown in this tournament how much we’ve grown and improved as a team,” said Canadian fullback Ashley Lawrence. “I think every year we are evolving and you know having younger players coming through and even the veterans leading the way I think there’s a fine balance. I just hope that with our performance we were able to inspire future generations just like the team was able to do for me back in 2012. I just hope that we can continue to fuel that fire so that those little girls looking up can see themselves representing Canada one day.”

Canada started Stephanie Labbé in goal, Ashley Lawrence at right back, Kadeisha Buchanan and Shelina Zadorsky at centre back, Allysha Chapman at left back, and Desiree Scott, Sophie Schmidt, Janine Beckie, Jessie Fleming, Nichelle Prince and Captain Christine Sinclair from the midfield up through to the attack. In the second half, coach Kenneth Heiner-Møller replaced Prince with Adriana Leon (64‘), Chapman with Jayde Riviere, and Beckie with Rebecca Quinn (84’).