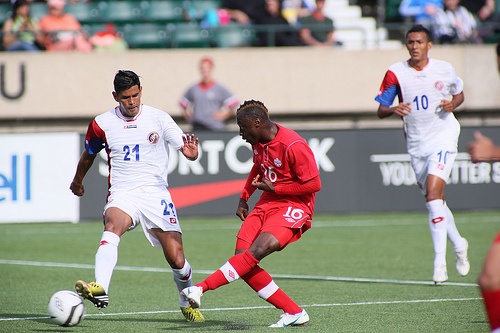 Canada was again left to rue a slew of missed chances as a penalty converted by Costa Rica’s Jairo Arrieta in the 16th minute proved to be the winner as Costa Rica earned a 1:0 victory in a Men’s International Friendly at Edmonton’s Commonwealth Stadium.

Centre-backs André Hainault and Doneil Henry had a number of headed efforts from close range for Canada – but neither defender could find the back of the net.

Both teams finished the match with 10 men after Nik Ledgerwood and Kenny Cunningham were sent off following an altercation in the 75th minute.

Costa Rican goalscorer Arrieta had a great chance to put his side ahead by two late in the second half – but his header from 15 yards crashed onto the cross-bar.

“I think the performance tonight shows that we are moving forward,” said Interim Canadian Head Coach Colin Miller after the game.

“Some of the young guys put in some terrific performances and I’m hoping that with some of the MLS and European-based guys that weren’t there tonight – that we have the nucleus of something positive.”

“We had two players make their debuts tonight as well. That has to be seen as a positive.”

While the Canadian coach was encouraged by elements of the perfrormance – he was also frustrated by his team’s wastefulness in front of goal.

“If we had hit the target on some of the headed opprotunities from set pieces this could have been a different game. Kyle Bekker’s delivery was fantastic at a times.”

The match in Edmonton was played in from of a crowd of 8,102. It was Canada’s first game in Alberta since 2008.

Canada’s next scheduled action is the first match of the 2013 CONCACAF Gold Cup where the team will take on Martinique in Pasadena, CA on 7 July.