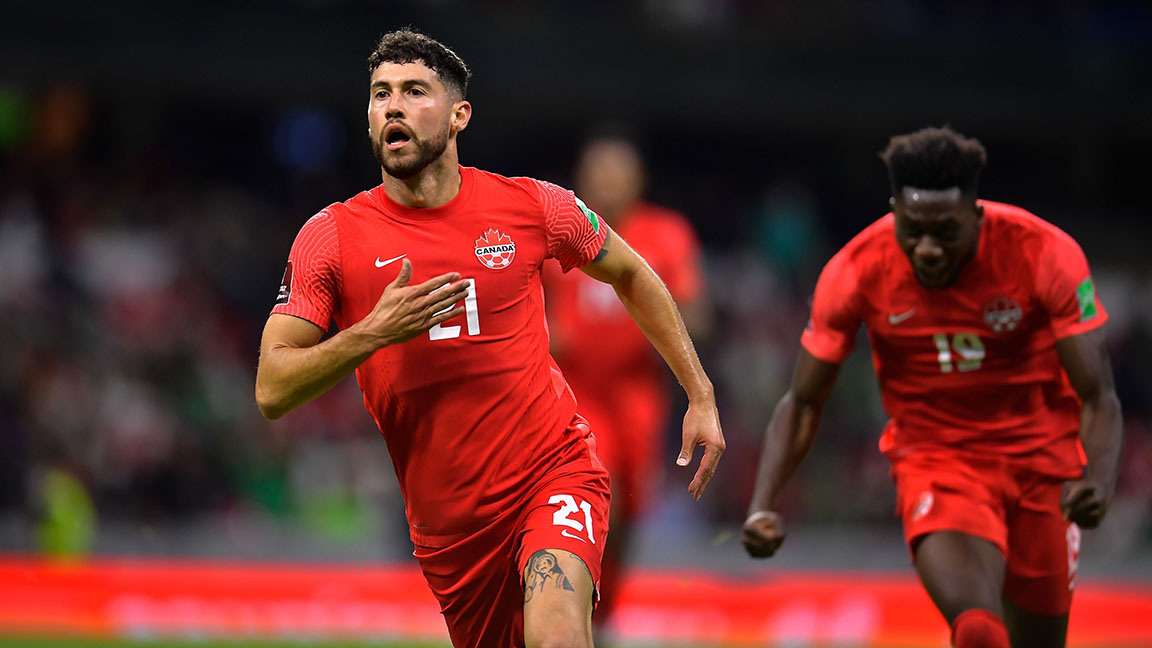 The draw gives Canada six points through four games in the Concacaf Final Round of FIFA World Cup Qualifiers ahead of a 10 October match against Jamaica in Kingston, Jamaica before a 13 October home match against Panama at BMO Field. Tickets for the Canada-Panama are available at CanadaSoccer.com.

“We wanted to win here and be that first team that took three points,” said John Herdman, Canada Soccer’s Men’s National Team Head Coach. “There’s been a team before us that drew at Azteca so we’re disappointed in a way, but, Mexico as you know are a top team. We suffered a little bit in that second half. I thought we were in control of their attack and we knew that we could be a transitional threat. At the end of the day, we’ve had a great experience here, the boys will remember this day for the rest of their lives and we took a point.”

The Osorio goal was set up by Alphonso Davies, who with his 14th career assist tied the Men’s National Team all-time record set earlier this year by Junior Hoilett. With the point, Canada have posted away draws against both USA and Mexico in the same round of FIFA World Cup Qualifiers for the first time since 1980.

“We know that we could have played better in the first half and that we could have taken three points today,” said Jonathan Osorio, Canada’s Player of the Match. “This is a very special goal for me and for Canada,” said Jonathan Osorio. “We know we have a lot of work to do. We have a lot of character on this team. Going down in this tough environment against a tough team and knowing we could come back. I think we showed today that we’re a really good team.”

Both of Canada’s upcoming matches will be broadcast live on OneSoccer including TELUS channel 980, onesoccer.ca, Sportsnet and RDS, including a one-hour Match Day Live show. Fans will find extended coverage across Canada Soccer’s digital channels on Facebook, Instagram, Twitter and YouTube featuring the hashtags #CANMNT and #CANWNT.

Canada’s first opportunity came in the 15’ on a quick break attack. Richie Laryea was able to break past two tackles and played a nice give and go with Davies. Laryea’s strong shot was saved by the diving Mexico goalkeeper Guillermo Ochoa and the rebound was fired over the net by Tajon Buchanan.

In the 18’, a giveaway in the middle of the park created a dangerous opportunity for Mexico as Hirving Lozano was able to cut inside and get a shot away, but it went wide of the Canadian net.

Mexico took the 1-0 lead on the Sánchez goal midway through the first half. The Mexican fullback was played in over the top as the home side quickly switched the play across the field and he slotted a shot coolly past Canadian goalkeeper Maxime Crépeau (20’).

In the 31’, Buchanan put on a burst of speed and won the footrace against two Mexican defenders to the ball and put in a beautiful cross that found Davies, but he wasn’t able to get enough of a touch on the ball to steer it into the gaping net.

In the 34’ Buchanan was played wide by Osorio, and his shot was deflected in behind by a defender for a Canadian corner.

In the 40’, Stephen Eustáquio floated in a perfectly weighted free kick to find the run of Steven Vitória but the header was saved by Ochoa.

Canada equalized late in the first half. Davies played a perfect pass that split the two Mexico defenders and found Osorio free in the box and Osorio picked out the far corner (43’).

In the 58’ Mexico came close to taking the lead again, as Jesus Corona was played in behind the Canadian defence thanks to a quickly taken throw-in. His shot at the near post was saved by Crépeau.

In the 64’ the ball was played in towards the Canadian back post, forcing Alistair Johnston to have to get a head on it to keep it away from the Mexico attacker. Johnston’s header hit his own crossbar and was fortunately cleared to safety by Vitoria.

Liam Fraser’s first touch of the game was a fantastic header off a corner kick that would have given Canada the lead, but the shot was pushed over the crossbar by Ochoa (79’).

In the 88’ Mexico switched the ball brilliantly across the Canadian penalty area before Lozano hit a shot that was just inches wide of Crépeau’s near post.

Canada’s starting XI featured Maxime Crépeau in goal, Alistair Johnston at right back, Steven Vitória and Kamal Miller at centre back, Richie Laryea at left back, and Jonathan Osorio, Stephen Eustáquio, Mark-Anthony Kaye, Alphonso Davies, Tajon Buchanan, and Jonathan David from the midfield up through the attack. In the second half, coach Herdman replaced Johnston with Samuel Adekugbe (77’), Kaye with Liam Fraser  (77’), Osorio with Liam Millar (77’), and David with Charles-Andreas Brym (85’).

CANADA SOCCER’S MEN’S NATIONAL TEAM PROGRAM
Canada has built plenty of momentum in a landmark year for the Men’s National Team Program that will feature a record 19 international matches including FIFA World Cup Qualifiers and the Concacaf Gold Cup. Through September, Canada have played 12 of those matches with a 9-1-2 record, six clean sheets and a record 43 goals scored. Canada also set a record with eight consecutive wins and reached the Concacaf Gold Cup Semifinals for the first time since 2007.