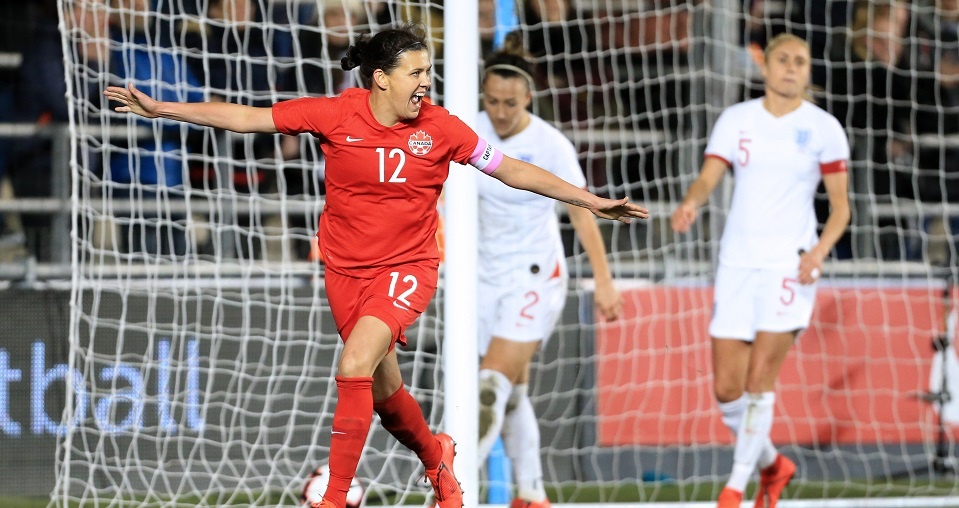 Canada Soccer’s Women’s National Team, ranked fifth in the FIFA World Rankings defeated number three ranked England 1:0 in an intense pre-FIFA Women’s World Cup encounter at sold-out Academy Stadium in Manchester, UK. Christine Sinclair pounced on a rebound of a Nichelle Prince shot that hit the cross bar in the 80’ for her 180th career goal, leaving her five short of the all-time international goal scoring record.
In 2019, the Women’s National Team is undefeated with five straight clean sheets and the win brings Heiner-Moller’s record to 11W-2D-4L since he began his tenure in January 2018.
“I think we put on a very good performance. This is one of the contestants who will compete to win the FIFA Women’s World Cup,” said Heiner-Moller.  “It is part of our DNA not to sit back and we can counter because we have fast players up front. We took the game back, took initiative, and even away from home we want to be that team. This win will definitely give us momentum and I think this was a big step for us.  We’ve played some big opponents ahead of this match, but, this was by far our best opponent this year.”

In the opening half, Canada had success in organized attack and kept possession for much of the opening fifteen minutes. Sophie Schmidt had Canada’s best chance early, after combining with Allysha Chapman and putting a rebound off a deflected shot just wide of England keeper Karen Bardsley’s net. Nichelle Prince had a chance in the 22’ when a ball into the 18 fell to her but her shot did not get through on goal. Canada’s defensive shape kept England from mounting any meaningful attack in the opening 40’ and while England were able to create a few chances on the counter late, Stephanie Labbé ensured the teams went into half time 0:0.
At the 50’ in the start of the second half, Janine Beckie forced a Bardsley save with a blast from 8 yards out. England’s pressure caused trouble for spells in the second half with Canada forced to defend deep and England testing Canada’s back line. Second half sub Jayde Riviere got free in space in the 77’ but England were able to recover inside the box with a tackle to stop the chance. After Ashley Lawrence played a ball into the box, Nichelle Prince hit a bouncing ball into the underside of the crossbar, over Bardsley. The ball ricocheted back to Sinclair who took a deft touch off her thigh and hit the half volley giving Canada the 1:0 lead.
“I think it was a battle. Two of the top teams in the world going head to head. I think it was a matter of inches. They made a couple great saves, our keeper made a couple great saves and I think we were fortunate to get one,” said Captain Christine Sinclair. “These are the games you live for, it’s the perfect preparation for us for the FIFA Women’s World Cup and I think you’re looking at two teams that are hopefully going to go pretty far in the tournament.”

“It’s going to be great,” said Heiner-Møller about the addition of a match against Nigeria.  “We have been looking for a strong African opponent ever since we drew Cameroon in the group stage of the FIFA Women’s World Cup, so this is a great opportunity for us to understand better the style and how to play around it.”
Canada Soccer Send-Off Home Match
Canadians will have an opportunity to see Canada Soccer’s Women’s National Team at home before the FIFA Women’s World Cup when they play a “Send-Off” match against Mexico in Toronto at BMO Field on 18 May at 13:00 ET/10:00 PT.  To catch Canada Soccer’s Women’s National Team at home before they head to France, visit canadasoccer.com/tickets for full information.

FIFA Women’s World Cup France 2019™ Group Stage
Canada will launch their FIFA Women’s World Cup campaign against Cameroon on Monday 10 June at Stade de la Mosson in Montpellier, France. Canada will then travel to Grenoble for their second group stage match on Saturday 15 June against New Zealand at Stade des alpes. Canada then concludes the group phase in Reims on Thursday 20 June with a match against the Netherlands at Stade August-Velaune.

At the last three major women’s tournaments, Canada finished third at the London 2012 Women’s Olympic Football Tournament, sixth at the FIFA Women’s World Cup Canada 2015™, and third at the Rio 2016 Women’s Olympic Football Tournament.
About Canada Soccer
Canada Soccer, in partnership with its membership and its partners, provides leadership in the pursuit of excellence in soccer, both at the national and international levels. Canada Soccer not only strives to lead Canada to victory but also encourages Canadians to a life-long passion for soccer. For more details on Canada Soccer, visit the official website at canadasoccer.com
For our most recent photographs, please visit our Flickr Photostream.