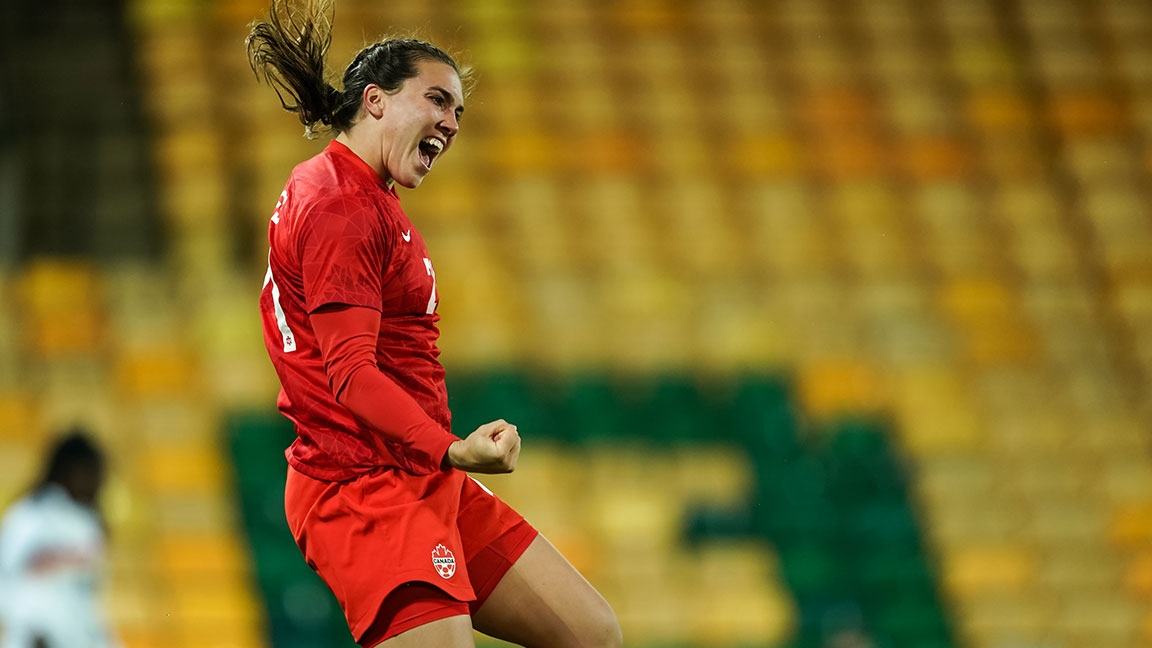 Canada earned a historic 1:0 win on Sunday as they posted their first-ever clean sheet against two-time FIFA Women’s World Cup champions Germany. Player of the match Vanessa Gilles scored the lone goal on a header from a Janine Beckie corner kick while goalkeeper Kailen Sheridan and the Canada backline posted the clean sheet.

The Canada win moves them into first place among the four nations competing at the 2022 Arnold Clark Cup, with both England and Spain tied for second place after a 0-0 draw earlier in the day also at Carrow Row Stadium in Norwich, England. Germany have one point from a 1:1 draw with Spain from the opening day of the tournament.

On Wednesday 23 February, Canada will face Spain at Molineux Stadium in Wolverhampton at 14.30 local with a live broadcast on TSN (09.30 ET / 06.30 PT). Fans will find extended coverage across Canada Soccer’s digital channels on Facebook, Instagram, Twitter and YouTube featuring the hashtag #CANWNT.

“We started bright and well, but as the game went on you probably saw our legs go a little bit which can be the nature of a tournament and we were lacking forwards (for substitutions), but we found a way to win,” said Bev Priestman, Canada Soccer’s Women’s National Team Head Coach.

“We have a big summer coming up and the Arnold Clark Cup is critical in our preparations. Going into the last game we are in the driver’s seat, but we can’t go into that game being complacent because we also weren’t dominant against Germany, so we will keep our feet on the ground.”

Gilles’ goal, scored in the seventh minute, was the first of her international “A” career. Beckie delivered the cross from a corner kick on the right from which Gilles headed the ball past goalkeeper Ann-Katrin Berger.

“If I hadn’t headed it, Kadeisha Buchanan was right behind me, so that goal was straight from the training pitch and something to which we have been working,” said Vanessa Gilles of her first international goal. “It always feels good to get a win and a clean sheet, especially in a tournament. Canada have always been known as a nitty gritty team that loves to defend and that’s been our bread and butter.”

The win was also Canada’s second 1:0 clean sheet victory over a former FIFA World Cup and Olympic champion in the past year, having recently beaten USA 1:0 in the semifinals at the Tokyo 2020 Olympic Games. Canada’s last and only previous victory against Germany was a 2:1 win in the group phase at the Rio 2016 Olympic Games.

Canada’s starting XI featured Kailen Sheridan in goal, Jayde Riviere at right back, Vanessa Gilles and Kadeisha Buchanan at centre back, Ashley Lawrence at left back, and Desiree Scott, Quinn, Jessie Fleming, Janine Beckie, Cloé Lacasse and Nichelle Prince from the midfield up through to the attack. In the second half, Head Coach Bev Priestman replaced Riviere with Allysha Chapman (54′), Lacasse with Deanne Rose (54′), Scott with Gabrielle Carle (69′), Prince with Julia Grosso (69′), and Quinn with Sophie Schmidt (77′).

Canada took the lead early in the match as Vanessa Gilles tallied her first international goal, heading in a perfectly delivered corner kick by Janine Beckie (7’).

In the 25’, Gilles was called into action in the defensive end of the pitch, blocking two consecutive cross attempts during a dangerous German attack.

In the 37’, Beckie made a quick cut around the halfway line to find the space to send a long pass for Cloe Lacasse to run onto. Lacasse did well to get to the ball first and hold it as she waited for Canadian reinforcements before picking out the return pass to Beckie. Beckie’s curling shot went wide of the German net.

Just before halftime, Kailen Sheridan made a great save to maintain Canada’s lead, parrying away the shot by Klara Buhl (44’).

In the 47’, Beckie and Jayde Riviere both made great first time passes which freed up space for Prince to run through quickly, but her shot went over the crossbar.

In the 53’, Quinn played a beautiful pass with the outside of their foot to Prince, who collided with the German keeper just as her touch looked like it would take her clear through on goal.

A sprawling toe save by Sheridan in the 72’ denied Germany a tying goal. Sheridan was called into action again in the 90+1’ minute, punching away a dangerous German free kick away from a cluster of players to maintain the clean sheet.