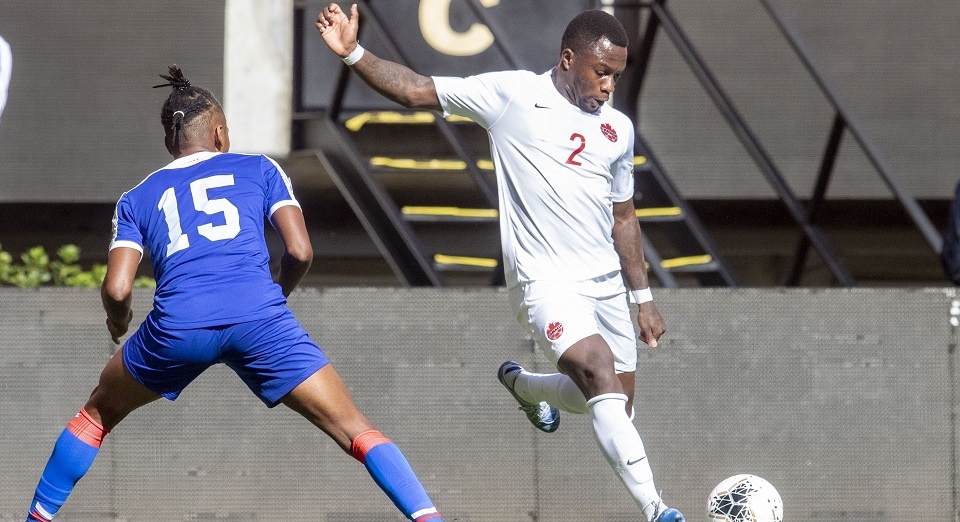 Canada Soccer’s Men’s U-23 National Team added a 0:0 draw against Honduras to their opening match 2:0 victory over El Salvador at the Concacaf Men’s Olympic Qualifying to go up four points with a 1-1-0 record after two Group B matches. Canada will wrap up the group phase with an all-important match against Honduras on Thursday 25 March (19.30 local / 21.30 ET / 18.30 PT on OneSoccer.ca).

“The destiny is in our hands with the four points after two matches and even though we would have liked to close it off, we knew this was going to be a hard match against Haiti,” said Mauro Biello, Canada Soccer’s Men’s Olympic National Team Head Coach. “Now our focus will be Honduras and to get the points we need to go through to the next round.”

In the first half, Canada had their best pressure early, forcing a free kick and a pair of corner kicks inside the first five minutes. In the 13th minute, a great cross by Zachary Brault-Guillard to Charles-Andreas Brym and then Tajon Buchanan was blocked from inside the box. In the 20th minute, another chance from a Brault-Guillard cross and Buchanan header was again stopped.

In the 30th minute, Canada were close again on a corner kick, this time with Derek Cornelius knocking the ball over the crossbar. In the 41st minute, a nice Brym to Aidan Daniels to Theo Bair combination was caught offside.

In the second half, Canada had an early free kick opportunity that sailed high over the goal in the 48th minute. They were closer in the 62nd minute when a Buchanan header from a Michael Baldisimo free kick was stopped by the goalkeeper.

Canada’s goalkeeper James Pantemis came up with some big saves for Canada in the second half, notably in the 56th minute on a chance from Dutherson Clerveaux in front of the goal, in the 67th minute on a shot from Eliader Dorlus, and again in the 72nd minute on a header from Clerveaux from inside the box.

Canada had its best chance in added time. Tajon Buchanan’s long winding run into the Haitian 18 saw him lay off a pass to Ballou Tabla as he was falling, Tabla’s shot was on target but was deflected by both a Haitian defender and Goalkeeper Alan Jerome.

“We’re going to take the point today and we’re going to refocus on Honduras,” said captain Derek Cornelius. “We’re going to be coming out strong, be better and get the three points in that last game coming up in two days.”

Canada’s starting XI featured James Pantemis in goal, Zachary Brault-Guillard at right back, David Norman and Derek Cornelius at centre back, Marcus Godinho at left back, and Michael Baldisimo, Patrick Metcalfe, Aidan Daniels, Charles-Andreas Brym, Tajon Buchanan and Theo Bair from the midfield up through to the attack. In the second half, coach Mauro Biello replaced Daniels with Ballou Tabla (58’), Brault-Guillard with Zorhan Bassong (70’), Bair with Lucas Dias (70’), and Brym with Ryan Raposo (79’).

Every Canada match at the tournament will be broadcast live on OneSoccer with extended coverage throughout the tournament on Canada Soccer’s digital channels including Youtube, Facebook, Instagram and Twitter featuring the social media hashtags #canm23 and #CMOQ