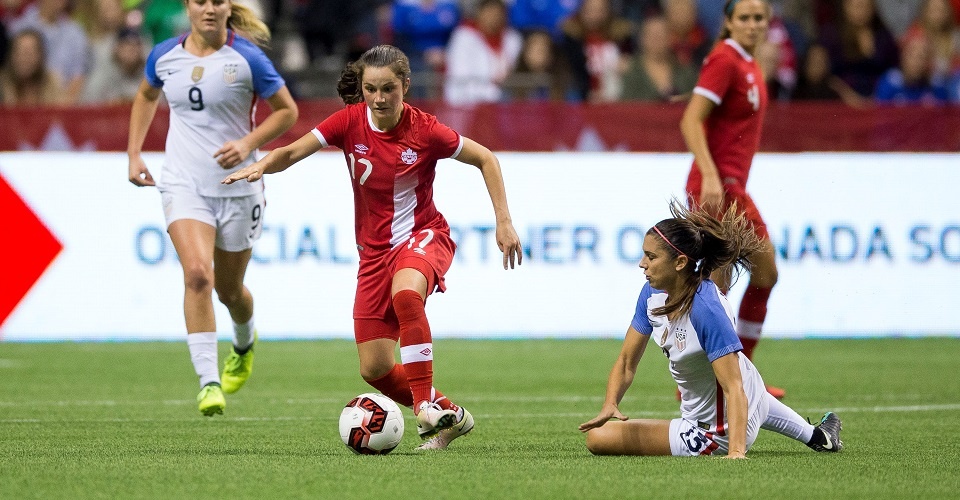 In a match that proved Canada’s goal to reach #1 in the world is not only possible, but attainable, the Canadian side put sustained pressure on the USA and forced their opponent to play Canada’s game.

Canada opened the match on the attack, sending Janine Beckie, Deanne Rose and Christine Sinclair into the US box on numerous occasions before the 15 minute mark. Canada got into goal scoring position several times before the USA opened scoring in the 30th minute. Casey Short headed a clearance back into danger that was collected by Alex Morgan and her right footed volley deflected off Rebecca Quinn on its way into the bottom corner of the Canadian goal.

With a strong CanadaRED crowd behind them, Canada tied up the game in the 57th minute, after sustaining its pressure coming back from the halftime break. Beckie started the play with a long range right footed strike that called out the best from Alyssa Naeher who two handed it over the bar for a corner. Off Beckie’s corner, Quinn headed it toward goal and Naeher punched it back out before Quinn collected the ball and shot it again, this time off the bar. The ball came to Sinclair, and with her back facing the goal, she kicked it over head toward net, where Adriana Leon touched it in to level the match.

“We look at our roster and we have veteran players and a handful of teenagers. It is a great mixture with some world-class players,” said Captain Christine Sinclair. “During half time we said that we could score. Adriana Leon is one of those players that is never going to give up and never going to quit. You saw that tonight, she was a sparkplug.”
Canada’s sustained pressure was the defining quality of the match, with an aggressive attack that didn’t seem to ebb as the match went on.
“The crowd was great, everyone was on their feet. The only thing that’s bruising is to not come off with a win tonight,” said Head Coach John Herdman after the match. “There’s an exciting future for Canada here. We have had extensive training leading up to this game, we know what the USA can do and it was nice to see the preparations worked. I am really proud of every player on the field.”
“We played well and had a dominant performance. We were unfortunate to come out with a draw,” added Adriana Leon. “We need to work on attacking cross. We put in some good balls but fell short. I thought we could have scored more goals.”
The draw in front of a capacity crowd of 28,017 at BC Place was the largest for an international friendly played in British Columbia, ninth largest Canada Soccer Women’s National Team home match in it’s history, and the fourth largest for a Canada v USA match all time.
Canada will travel to San Jose, California for the second leg of the home and away series for the 12 November match at Avaya Stadium.
Canada will close out the 2017 season with an international friendly against 14th ranked Norway in Marbella, Spain on 27 November.