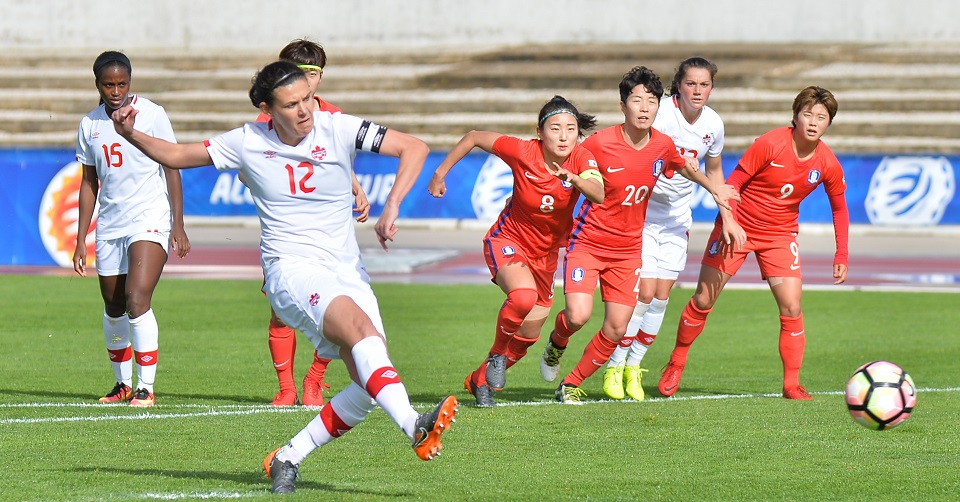 Canada Soccer’s Women’s National Team defeated Korea Republic 3:0 in its final Algarve Cup group stage match, with Captain Christine Sinclair and Jessie Fleming scoring for Canada. Sinclair earned her 171st and 172nd international goals, putting her now only 12 goals back from the world record, while Jessie Fleming earned her fifth goal on the occasion of her 50th appearance.
“Overall, we are happy with Canada’s performance,” said Head Coach Kenneth Heiner-Møller. “Tonight we demonstrated the kind of intensity and level of play we expect of ourselves, so this was a better match,  but we were building towards it and I think it shows that this team continues to be a real force.  This tournament is about getting ready for the CONCACAF Women’s Championships later this year, to qualify for the FIFA Women’s World Cup. We’ve had the opportunity to work on some things that are really going to benefit us moving through this year.  Now, we will wait to see who we play in our final match, but I am really pleased.”
Canada was in control of much of the first half, with several offensive pushes towards Korea Republic’s net.  In the 23rd minute Jessie Fleming was pulled down in the box to earn Canada a penalty kick.  Sinclair lined up and shot the ball low to left and Korea Republic’s goalkeeper Yoon Younggeul was able to get there and make the stop, but only to produce a rebound that Sinclair jumped on to bury the ball in the back of the net.
Canada’s second goal was scored in the 73rd minute after Sinclair brought the ball up the middle of the pitch and made a quick pass to Fleming coming up her right.  Fleming worked the ball to the top of the box and chipped it over the goalkeeper to put Canada up by two.
“I can’t say enough about Fleming and her ability on the ball,” said Heiner-Møller after the match. “She is such a high-performer, there is no doubt there are more appearances ahead of her than behind her.”
Canada continued to apply pressure with substitute Jordyn Huitema bringing the ball quickly up the line to set up the third goal in the 79th minute.  Sinclair’s 172nd international goal was scored after Huitema crossed the ball into Korea Republic’s box for Janine Beckie, whose shot was blocked by a defender. Sinclair, however, was there again to make sure the rebound found the back of Korea Republic’s net.
“Sinclair has played back-to-back ninety minute games and she’s in incredible physical condition.
It’s always a pleasure working with someone like her, a world-class talent, and I’m looking forward to working with her as we move towards the FIFA Women’s World Cup,”  added Heiner-Møller.
Canada subbed Ashley Lawrence in for Lindsay Agnew and Janine Beckie in for Nichelle Prince at half-time, Maegan Kelly replaced Jenna Hellstrom in the 60th minute, Jordyn Huitema replaced Sophie Schmidt in the 75th minute, Adriana Leon replaced Christine Sinclair and Julia Grosso came in for Jessie Fleming in the 80th minute.
Canada came out of group stage at the 2018 Algarve Cup with two wins and a loss, having fell to Sweden in the opening match 1-3 and then defeating Russia 1-0 and Korea Republic 3-0.   Sweden went on to win all of their group stage matches, securing top spot in Group B.  The final group rankings and positions for 7 March will be determined later tonight after all the matches are complete.
Fans can follow Canada’s journey on the road to the FIFA Women’s World Cup France 2019™ across Canada Soccer’s digital channels including CanadaSoccer.com, Facebook, Twitter, and Instagram.

UPCOMING HOME MATCH in HAMILTON, ONTARIO
Individual tickets to the Canada v Germany match will go on sale to the public on International Women’s Day, Thursday 8 March, via Ticketmaster.ca. The launch of ticket sales will be preceded by a 48-hour pre-sale for Canada Soccer Insiders. Tickets to the match start as low $20 (plus applicable fees) and fans will once again be able to take advantage of a ‘Me+3’ offer in select sections.