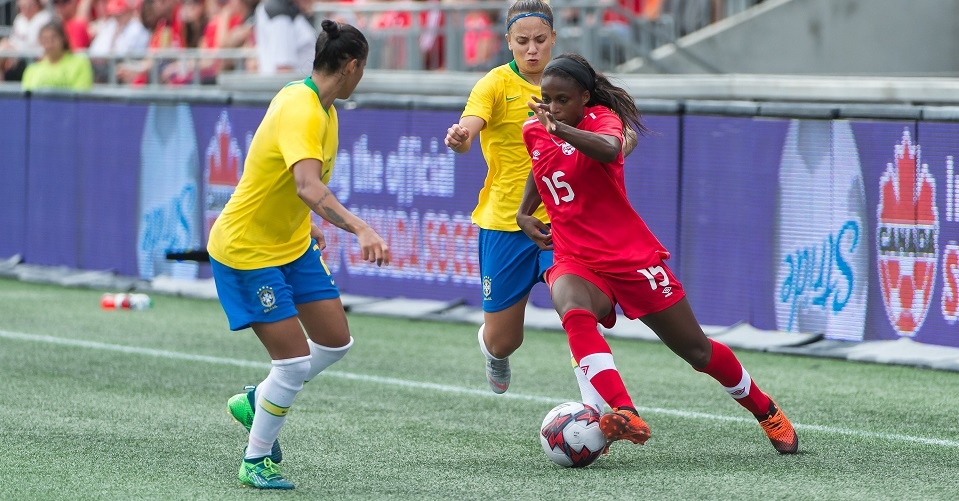 Canada Soccer’s Women’s National Team defeated Brazil 1:0 in its final International Friendly ahead of the 2018 Concacaf Women’s Championship in front 16,128 fans at TD […]

Canada Soccer’s Women’s National Team defeated Brazil 1:0 in its final International Friendly ahead of the 2018 Concacaf Women’s Championship in front 16,128 fans at TD Place on September 2.
The match was a Rio 2016 Olympic Bronze Medal rematch and the first meeting since Canada beat Brazil 2-1 in Sao Paulo to earn its second Olympic Bronze Medal, becoming the first Canadian team to win back-to-back Summer Olympic medals since 1908 and the first-ever women’s Canadian team to return to the podium.
Canada pressured Brazil in the first half through a number of set plays, but the teams were still even 0:0 after 45 minutes. Canada came out of the halftime break looking determined. Kadeisha Buchanan threaded a Janine Beckie free kick from just outside the box to Nichelle Prince who connected and put the ball into the top netting in the 49th minute.
“We wanted to score a goal and get a win for the fans here in Ottawa,” said Head Coach Kenneth Heiner-Møller. “Defensively we were very, very good. We didn’t let them have any joy between our lines, which is what we wanted, to close down on the ball.”
Canada made three subs in the 70th minute bringing in Adriana Leon for Janine Beckie up front, and in the midfield 17-year old Julia Grosso replaced veteran Diana Matheson and Rebecca Quinn took over duties for Desiree Scott.  Canada brought on 17-year old Jordyn Huitema for goalscorer Nichelle Prince in the 80the minute.
Canada will next head to the USA to compete in the 2018 Concacaf Women’s Championship which will automatically qualify the top three teams for FIFA Women’s World Cup 2019, with an additional opportunity for the fourth-place team through a playoff with Argentina of CONMEBOL. The official draw for the 2018 Concacaf Championship will take place Tuesday, 4 September at 10.00 ET / 07.00 PT and will put the eight participating finalists into two groups of four for the first round of the competition.

“We’re definitely building toward the qualifiers but we need to be better,” said Heiner-Møller. “We’re in great positions but the ball’s just traveling with too much speed or the space gets closed down and we’re into defensive transition.”

Canada, along will Mexico and USA, received automatic berths into the tournament, while the five remaining competition spots were confirmed through regional qualifiers with Panama and Costa Rica qualifying out of Central America, and Jamaica, Trinidad and Tobago, and Cuba for the Caribbean.

The 2018 Concacaf Women’s Championship will run from 4 to 17 October at Sahlen’s Stadium (Cary, North Carolina), H-E-B Park (Edinburg, Texas) and Toyota Stadium (Frisco, Texas).  Canada will start their qualification campaign in Edinburg, with the Semi-Final and Final to take place in Frisco.

Canada’s young guns will also take the pitch in a major international tournament when Canada takes part in the FIFA U-17 Women’s World Cup Uruguay 2018.  Canada will face Spain, Korea Republic and Columbia in its group stage beginning 14 November in Montevideo.  All four 17-year old players on Sunday’s roster are eligible for the tournament.
About Canada Soccer
Canada Soccer, in partnership with its membership and its partners, provides leadership in the pursuit of excellence in soccer, both at the national and international levels. Canada Soccer not only strives to lead Canada to victory, but also encourages Canadians to a life-long passion for soccer. For more details on Canada Soccer, visit the official website at canadasoccer.com
Canada Soccer’s Women’s National Team
Canada are two-time Olympic bronze medal winners (2012 and 2016) and two-time CONCACAF champions (1998 and 2010). In all, Canada have participated in six consecutive editions of the FIFA Women’s World Cup (1995 to 2015) and three consecutive editions of the Women’s Olympic Football Tournament (2008 to 2016). At Rio 2016, Canada Soccer’s Women’s National Team were the first Canadian Olympic team to win back-to-back medals at a summer Olympic Games in more than a century.
At the last three major women’s tournaments, Canada finished third at the London 2012 Women’s Olympic Football Tournament, sixth at the FIFA Women’s World Cup Canada 2015™, and third at the Rio 2016 Women’s Olympic Football Tournament.