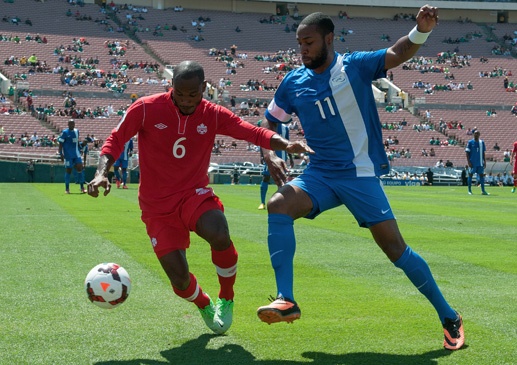 Canada’s next fixture at the tournament is a Thursday date with Mexico in Seattle, WA, USA.

Martinique’s Fabrice Reuperné scored a screamer with virtually the last kick of the game to earn his side a 1:0 win over Canada in the opening match of the 2013 Gold Cup.

Both teams had traded chances throughout the contest before Reuperné snatched the 92nd-minute winner in the tournament’s first match on Sunday at the Rose Bowl in Pasadena, CA.

Marcus Haber had an early chance to put the Canadians ahead but his header was saved by Kévin Olimpa in goal for Martinique.

Canada also came close to going ahead when Julian De Guzman’s cross was nearly deflected in for an own goal, but Olimpa recovered to gather the ball.

“You cannot give away the ball at this level of football and expect to get away with it and we were punished in the end,” said Canadian Interim Head Coach Colin Miller.

“You have to give credit to Martinique, they persevered right to the very end.”

Canada currently sit in last place in Group A following the completion of the first day of group play. Panama defeated Mexico 2:1 in other group match of the day.

Canada’s next fixture at the tournament is a Thursday date with Mexico in Seattle, WA, USA.

“We will need pick ourselves up, review all of the little things we can improve and ensure that we put in a better performance on Thursday,” said Miller.

“We know we need to be more effective with the ball in posession; and that we need to find a way to be more penetrating with our play.”

Following Canada’s Thursday match against Mexico, the team will play Panama on Sunday in Denver, CO to closeout the group stage.

Canada will need to finish in the top two places in Group A; or as one of the two highest ranked third-place finishers in overall play to qualify for the knock-out stages.