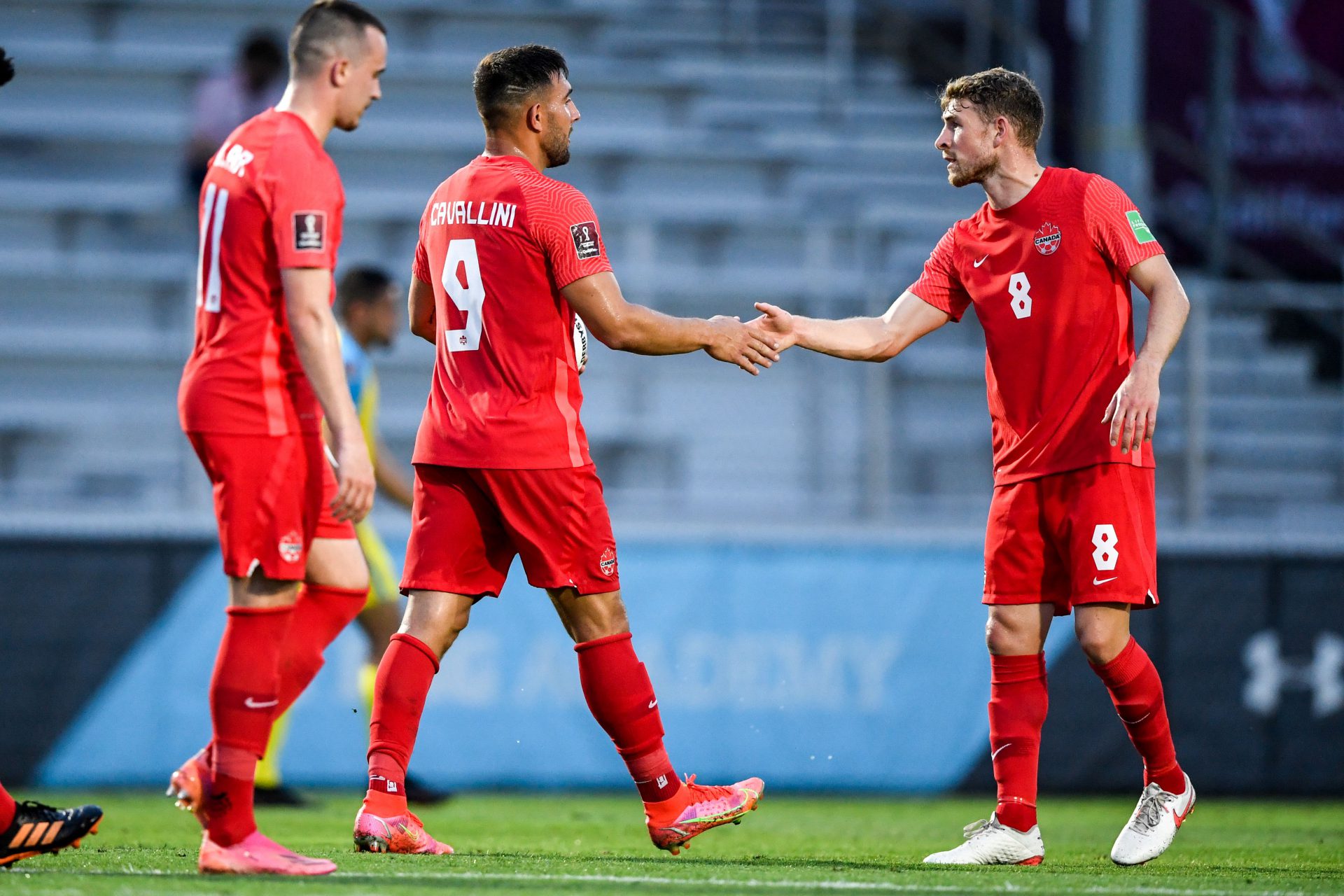 Man of the Match 🍁 Mark-Anthony Kaye

Canada Soccer’s Men’s National Team continued its FIFA World Cup Qatar 2022™ Qualifiers campaign with a strong 7:0 win over Aruba on Saturday at the IMG Academy Soccer Complex in Bradenton, Florida. With the win Canada regained its position atop Group B, setting up a crucial match against Suriname on the final match day of the First Round of group play.

The Canadian result was powered by two goals from Lucas Cavallini, and one each from Junior Hoilett, Zachary Brault-Guillard, Alphonso Davies, Cyle Larin, and Jonathan David.

“We knew Aruba would be a tougher test than the Cayman Islands, but, the conditions were tough here for the lads. It was hot and humid but they pushed through,” said John Herdman, Men’s National Team Head Coach. “Tonight was about getting them (Alphonso Davies, Jonathan David, Cyle Larin) the feel in a match condition, in a Canadian shirt to be part of the first mission. They deserve it, they’re our top players.”

Only the group winner will advance beyond the First Round of FIFA World Cup Qatar 2022™ Qualifiers, with the Group B winner to face the Group E winner in a Second Round head-to-head series on 12 and 15 June that will start in either Haiti or Nicaragua. The winner from that Second Round then advances to the Concacaf Final Round of eight nations scheduled to begin in the Fall of 2021.

Canada’s international matches in FIFA World Cup Qatar 2022™ Qualifiers will all be broadcast live on OneSoccer with the Tuesday Canada-Suriname match scheduled for 21.00 ET / 18.00 PT (20.00 local in Bridgeview, Illinois). Canada’s home match on 8 June at SeatGeek Stadium will be played in a closed-door environment. Fans will find extended coverage across Canada Soccer’s digital channels on Twitter, Instagram, Facebook and YouTube featuring the hashtag #CANMNT.

Canada opened the scoring in the 14’ as Steven Vitória played a great ball to pick out Junior Hoilett who combined well with Mark-Anthony Kaye down the Canadian right flank. Kaye then hit an inch perfect cross to the centre of the penalty area where Lucas Cavallini buried a header from six yards out.

Canada doubled its lead in the 20’ as Hoilett, captaining Canada on his birthday, converted a penalty low to the right corner, sending Aruba goalkeeper Eric Abdul the wrong way.

Cavallini capped a strong finish to the half for Canada, converting his second goal of the match in first half injury time as Tajon Buchanan dribbled into the Aruba penalty area and played a perfect ball across the face of goal to Cavallini who made no mistake driving a low shot past Abdul. The assist finished off a strong 45 minutes for Buchanan on his senior Canadian debut.

Canada kept the tempo high to start the second half and were rewarded with a fourth goal as first half substitute Zachary Brault-Guillard turned on the skill, turning smoothly to roll his defender before dispatching a powerful strike into the top corner of the goal. The stunning strike marked Brault-Guillard’s first goal in Canadian colours.

Canada continued the scoring in the 78’ as second half substitutes Jonathan David and Alphonso Davies played a neat combination down the left before Davies hit a left-footed strike that ricocheted and settled into the bottom corner.

The theme of second half substitutes scoring continued as Cyle Larin scored in the 88’ and Jonathan David capped the night for Canada in the 90’.

“All of these games pose a different mental challenge, but, you have to go into the games with the right mentality and be patient,” said Mark-Anthony Kaye, the Man of the Match. “We had to be persistent and trust our tactical ideas and eventually the team that’s defending is going to slip up and give you the chance to capitalize.”

Canada’s starting XI featured Dayne St. Clair in goal, Tajon Buchanan at right back, Steven Vitória and Frank Sturing at centre back, Samuel Adekugbe at left back, and Liam Fraser, David Wotherspoon, Mark-Anthony Kaye, Junior Hoilett, Lucas Cavallini and Liam Millar from midfield up through to the attack. In the 34th minute, Zachary Brault-Guillard replaced Junior Hoillett. In the second half, coach John Herdman replaced Millar with Theo Corbeanu (46’), Adekugbe with Alphonso Davies (64’) and Wotherspoon with Jonathan David (64’), and Cavallini with Cyle Larin (72’). Buchanan and St. Clair each earned their first caps for Canada.

In all, 30 Concacaf nations are competing in this first round with six group winners advancing to a second round of head-to-head knockout matches. FIFA have established Canada’s pathway for the FIFA World Cup Qatar 2022™ Qualifiers beginning with an initial round of four matches against Group B opponents Aruba, Bermuda, Cayman Islands and Suriname.

CANADA SOCCER’S MEN’S NATIONAL TEAM PROGRAM
Canada Soccer’s Men’s National Team, two-time Concacaf champions, were one of only four nations that have finished top-six across all three of Concacaf major tournaments across the past three years: fifth place in Concacaf Nations League A and sixth place at both the 2017 and 2019 Concacaf Gold Cups. In 2019 against Concacaf’s top three nations, Canada earned a victory against USA in Concacaf Nations League as well as eliminated both Mexico (U-15) and Costa Rica (U-17) in Concacaf youth competitions.

It will be an exciting yet busy summer of soccer for Canada Soccer’s Men’s National Team Program in 2021. On the heels of FIFA World Cup Qatar 2022™ Qualifiers in June, Canada will participate in the 30th anniversary edition of the Concacaf Gold Cup, with their Group B matches scheduled in Kansas City on 11 July against Martinique, 15 July against a yet-to-be-determined Caribbean nation from the preliminary round, and 18 July against USA. The top-two nations from Group B advance to the final round with the Quarterfinals on 24 July, the Semifinals on 29 July, and the Final on 1 August.