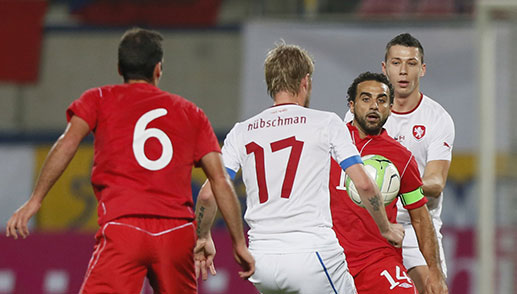 CanMNT is showing that it can compete with some of the toughest teams in the world.

For a team that’s still finding its new identity, Canada’s Men’s National Team is showing that it can compete with some of the toughest teams in the world.

Playing on the road against the Czech Republic on Friday, Canada conceded a goal early and a goal late but in between held plenty of possession and created some quality scoring chances, ultimately losing 2:0 in Olomouc, CZE.

“In these kinds of games, we have two aims: win the match, as always, and to do well what we have been preparing in camp,” Head Coach Benito Floro said after the game. “In this match, our plan was to press hard and to maintain the possession of the ball. If we take away the result we can say that both things we did well. We pressed strong and we had the ball for a lot of the time.”

Ondrej Celustka scored three minutes in and Tomas Horava added the insurance goal in the 81st minute but Canada had their chance to tie the game late in the first half when Dwayne De Rosario was fouled in the Czech penalty area.

De Rosario stepped up to take it himself and Czech goalkeeper Petr Cech dove well to his right to deny the penalty.

Seconds before, Canada worked a nice free kick to Tosaint Ricketts but his shot from the right side was also saved by Cech. For Floro, the early Czech free kick and Canada’s chance on their own free kick was decisive.

“In this match in one free kick the opponent scored a goal. In the other, we had a one against their goalkeeper and didn’t score so we need to improve,” Floro said. “When you don’t take advantage of your free kicks, it’s another very important matter.”

Canada has a chance to rebound quickly. The team returns to Austria for a few more days of training on Saturday before moving on in advance of Tuesday’s friendly in Celje, SVN.