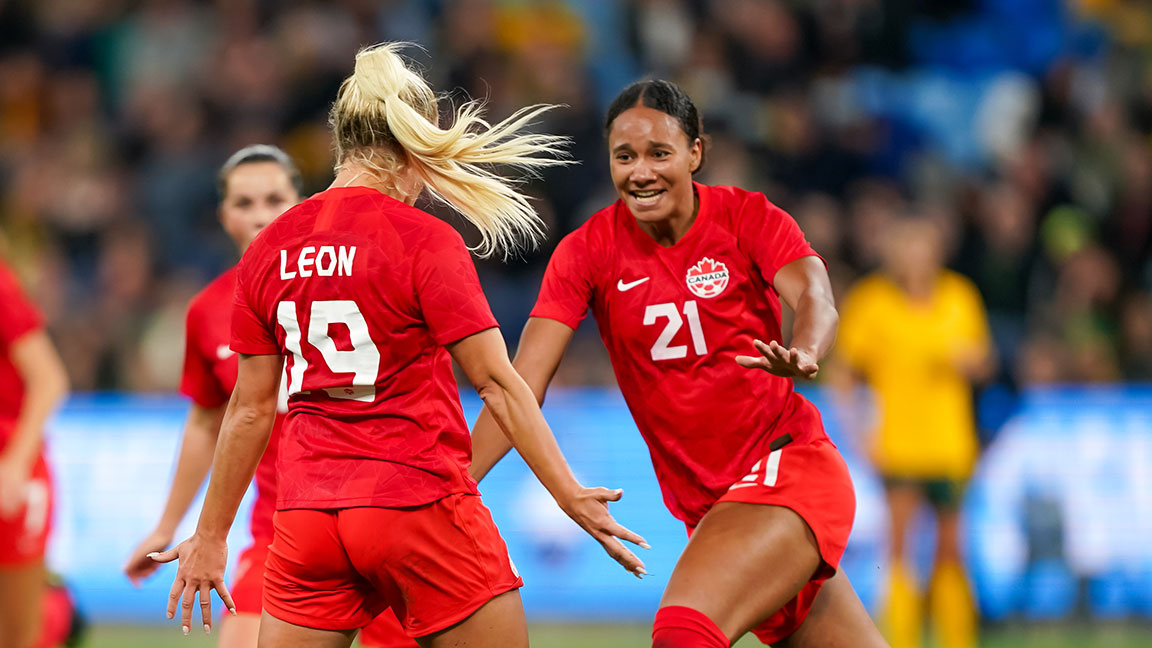 A pair of Adriana Leon goals helped Canada Soccer’s Women’s National Team come from behind to win 2:1 over Australia at the new Allianz Stadium in Sydney. The victory gave Canada back-to-back away wins during the September 2022 international window as they begin their one-year journey to the FIFA Women’s World Cup Australia & New Zealand 2023.

Leon now ranks sixth all-time on Canada’s goalscoring list while captain Christine Sinclair moved into second place on the world’s all-time list with 317 international “A” appearances. Down 1-0 after three minutes on the Mary Fowler opener, Sinclair set up the equaliser in the 48th minute before 19-year old centre back Jade Rose set up the game winner in the 64th minute.

“No spots are given and going into a FIFA World Cup I think that’s a healthy place to be, everyone is going to give you more,“ said Bev Priestman, Canada Soccer’s Women’s National Team Head Coach. “More than anything I’ve come away with a new shape and new players in that shape. Being able to change and to rotate players in different positions means freshness across the pitch which is an element we aim to achieve.”

Canada started the trip with a 1:0 victory over Australia on Saturday afternoon in Brisbane, with Leon again the goalscorer and goalkeeper Kailen Sheridan registering the clean sheet. Across 13 international matches this season, Canada have posted a record of eight wins, three draws and just two losses. With her two goals on Tuesday, Leon now has 27 career international “A” goals.

Australia opened the scoring in the third minute on a quick play after a turnover. Sam Kerr on the right took a pass from Courtney Vine and then centered it back for Fowler who fired a low shot past Sheridan for the 1-0 lead.

That was the only goal scored in the first half, but fans were on the edge of their seats in the 11th minute when both teams were called offside on back-to-back near breakaways for Kerr and Leon. Australia remained on the front foot for much of the half and Caitlin Foord thought she had a chance in the 42nd minute, but she missed the target with a shot to the near side. On another nice combination, Kerr nearly broke through on a Katrina Gorry pass, but Rose was there to knock it out.

Canada then equalised early in the second half on Leon’s first of two goals. Beckie and Prince were part of the build up on the left before Leon played it to Sinclair who’s first cross was blocked by defender Clare Polkinghorne. Sinclair quickly had a second chance on her cross and Leon got inside the six-yard box to redirect it past goalkeeper Lydia Williams.

With Rose continuing her strong play at the back, she nearly put Nichelle Prince through on a breakaway in the 53rd minute, but Prince was just offside. Just over 10 minutes later, Rose made it perfect with a through pass from the halfway line that put Leon in for a breakaway. The goalscorer made no mistake with her left foot for her third goal in two matches.

Australia were able to settle things down and pushed forward for an equaliser, but the Canada defence held strong for the rest of the match. Australia nearly had a chance in the 90th minute when the ball spilled through to Alex Chidiac, but Quinn was there to clear the chance.