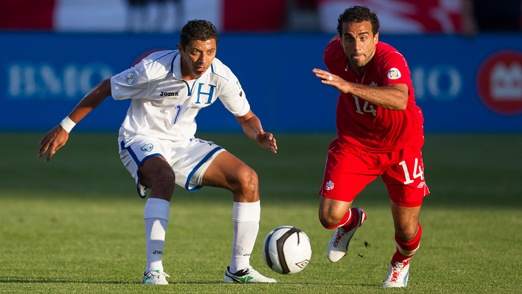 Canada has a win and draw in two matches in June, with four more matches to be played in September and October.

Undefeated Canada has four points in two matches in the CONCACAF 3rd Round of 2014 FIFA World Cup Qualifiers. Canada has a win and draw in two matches in June, with four more matches to be played in September and October. Following up on an away 1:0 win in Cuba, Canada drew 0:0 with Honduras at BMO Field in Toronto on Tuesday 12 June 2012.

Canada sits in second place in CONCACAF Group C with four points, trailing Panama who have collected six points in two matches. Also on 12 June, Panama won at home 1:0 over Cuba. Trailing Panama and Canada in the group standings are Honduras (one point) and Cuba (no points).

Of note, the match was played in front of a boisterous crowd, with 16,132 in attendance at BMO Field.

“The crowd was fantastic,” said Canadian head coach Stephen Hart. “I really have to thank the fans. They were there tonight to give us a push.”

Tickets to Canada’s next two home matches in FIFA World Cup Qualifiers are available via ticketmaster.ca or by phone at 1.855.570.7500, with full information available on CanadaSoccer.com. Group discounts are available via marketing@soccercan.ca or 613.237.7678. At BMO Field in Toronto, Canada faces Panama on Friday 7 September and then Cuba on Friday 12 October. Canada’s away dates are Tuesday 11 September in Panama and Tuesday 16 October in Honduras.